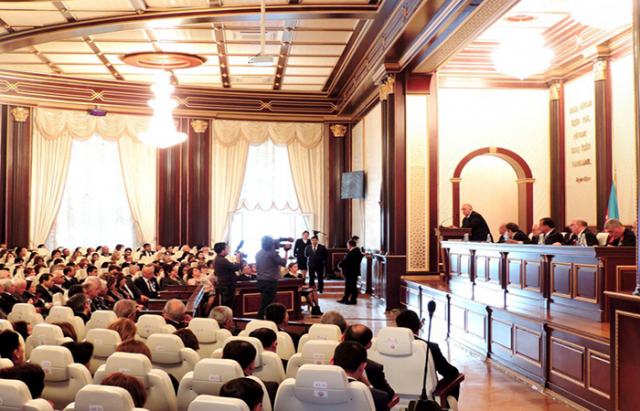 In advance, festival attendees paid visit to the monument of national leader Heydar Aliyev in the center of city, and put flowers in front of.

Then, was introduced Ganja Branch of Miniature Book, including exhibition “Ancient and modern science, culture center – Ganja”. Exhibition featured centuries-old history, rich material-cultural, as well as modern scientific potential of the city. A historical-documentary film, dealing with successes of various sciences in Ganja as a result of national leader Heydar Aliyev’s care and attention since 70s, was demonstrated.

Festival has been continued at the large hall of Ganja city Executive Power. Head of Ganja city Executive Power Elmar Veliyev brought to mind the vital role of Science Festival in terms of increasing academic prestige of domestic science and promoting obtained achievements. Currently, science and education policy is being implemented by President Ilham Aliyev decently.

Making speech on activities of Ganja Branch of ANAS the speaker underlined the important role of the Branch in coordinating economic potential of urban and suburb territories with scientific bases. Having declared the youth capital of Europe in 2016 – Ganja plays major role in promotion of people’s historical-cultural heritage.

Vice-President of ANAS, Academician Ibrahim Guliyev in his speech said that, the festival which held on the initiative of the Academy serves the dialogue between science and society. He said that the holding of the Second Festival of Science in the city Ganja is a significant event that will make a great contribution to the development of science in Ganja.

Academician-Secretary of Department of Human Sciences, Academician Teymur Karimli, speaking about the philosophy of humanism the great thinker, philosopher poet of XII century Nizami Ganjavi, said that in his works the poet wide place is given to the promotion of science.

Academician-Secretary of the Ganja Department, Academician Fuad Aliyev in his speech noted that, the preservation of the scientific and technical capacity, which is reflected in the the National Strategy for Advancement of Science, as well as highly qualified personnel training process in the field of science and education imposes greater responsibility for research institutions. Director of the All-Russian Science Festival, Leonid Gusev, noting the importance of the training of young specialists in the field of science, their proper direction and support in the modern period, urged scientists and experts to actively participate in this process.

The artistic part of the event members of the State Song and Dance Ensemble "Goy-Gol" Ganja State Philharmonic Society and the American musical group "Acidic Band" has perfomed.