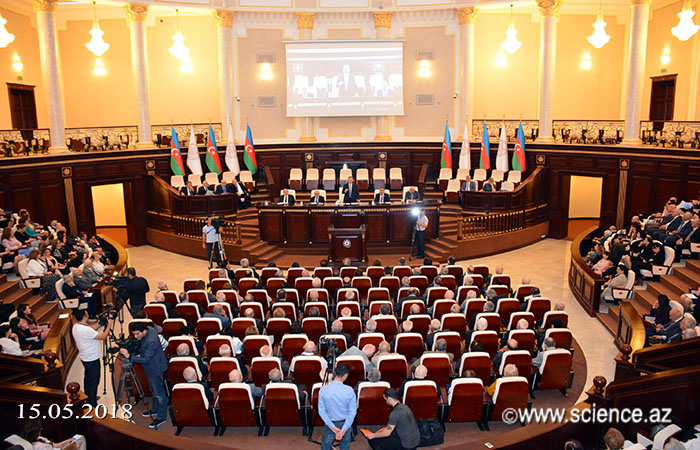 The jubilee meeting dedicated to the 110th anniversary of outstanding scientist, well-known public figure, academician Musa Aliyev was held in the Main Building on May 15.

First, the event participants visited the grave of prominent scientist M.Aliyev in the Alley of Honor.

Academician Akif Alizadeh, President of ANAS, said that the event was held under President Ilham Aliyev's Decree dated 21 February 2018 "On the celebration of the 110th anniversary of academician Musa Aliyev".

Head of ANAS spoke about the special services of Musa Aliyev in the field of training highly qualified personnel, who made important contributions to the development of geological science in Azerbaijan. He noted that as president of the Academy, he achieved important achievements in the formation of intellectual potential in the republic and organization of promising areas of science.

He was a prominent scientist and great public figure. He was a member of the USSR and Azerbaijani Supreme Soviet, member of the Central Committee of the Communist Party of Azerbaijan, Deputy Chairman of the Council of Ministers of Azerbaijan, chairman of the Planning Committee of the Azerbaijani Communist Party, Member of the Plenum of the Lenin Awards Committee and Vice-President of the Soviet-Pakistan Friendship Society, was awarded the title of Honorary Oilman by the Board of the Ministry of Oil Industry of the USSR, Akif Akif Alizadeh stressed.

Academician Akif Alizadeh shared his memories of the outstanding scientist: "In the autumn of 1956, I was informed that there were two vacancies at the Institute of Geology of academician Musa Aliyev, then president of the academy, and looking for young professionals there, it was very difficult to be employed at the academy I met Musa Aliyev, we talked and he hired me. "

Academician-secretary of the Department of Earth Sciences of ANAS, Academician Fakhradin Gadirov delivered a report on "Famous scientist's honorable life".

Academician Musa Aliyev has been working successfully in a number of high positions.In 1936-1941, he worked as an associate professor, dean of the oil faculty. In 1941-1942, he served as the head of the Ministry of Oil Industry of the former USSR In 1943-1949, he worked in party and government agencies of Azerbaijan, worked as Secretary of Industry Committee of the Central Committee of the Communist Party of Azerbaijan, deputy chairman of the Council of Ministers of Azerbaijan and State Plan Committee Chairman of the USSR Supreme Soviet, the speaker underlined.

The scientist emphasized that, as a result of research conducted by Musa Aliyev during the period of his activity in the Geological Institute, numerous geological, tectonic and neotectonic maps were drawn up to determine the prospects of various fields in Azerbaijan. These maps have played an important role in identifying a number of oil, ore and non-ore deposits.

M.Aliyev is the founder of the Mesozoic Paleontologist and Stratigraphy School in Azerbaijan. This school was renowned as the "Baku School" on the Jurassic and Tableton Stratigraphy in the USSR. A new era of Musa Aliyev's scientific activity began in Moscow in 1958 he was invited to the position of Deputy Director for Scientific Affairs at the Institute of Geology and Exploration of the Yanar excavation fields newly established in Moscow at the suggestion of President of the USSR Academy of Sciences, Academic secretary of the department lined out.

F.Gadirov noted that more than 60 philosophers and doctors of sciences were trained under the leadership of outstanding scientist, and he is the author of about 350 scientific works related to various problems of geology, paleontology and stratigraphy. He said that the name of academician Musa Aliyev has a special place in the history of development of Azerbaijani science and will serve as an example for many generations.

The reporter said that Musa Aliyev worked as an assistant, associate professor and dean of the Azerbaijan Industrial Institute, and in 1939 appointed as director of the institute.

Musa Aliyev was the initiator and organizer of the solemn celebration of the 20th anniversary of the prestigious higher education institution of the USSR at that time. Most of the Azerbaijanis, who represent only 25 percent, were awarded orders and medals on the basis of information sent to Moscow, the speaker noted.

Academicians Abel Maharramov, Vasif Babazadeh, Teymur Bunyadov and others spoke about the life and scientific activity of the scientist and shared their memories about outstanding scientist.

Later, Rector of ADA University, Professor Hafiz Pashayev shared memories about the scientist. He expressed his gratitude to the leadership of ANAS for the organization of the meeting, as well as the participants of the event.

At the end of the event, a documentary film about life and creativity of academician Musa Aliyev was demonstrated.