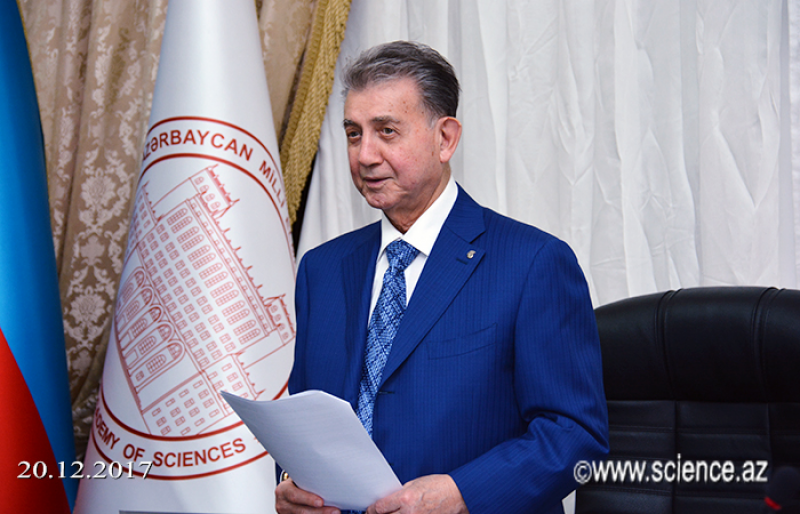 ANAS Presidium held next meeting on December 20. First of all, ANAS President, academician Akif Alizadeh awarded Academician-Secretary of the Department of Biological and Medical Sciences, academician Ahliman Amiraslanov the Certificate of Honor of ANAS devoted to the 70th anniversary of academicion.

Then, academician Akif Alizadeh told about the orders "On awarding workers of the oil industry in the Republic of Azerbaijan" and "On awarding persons who have merits in the social, economic and cultural development of the city of Ganja" signed by the President of the Republic of Azerbaijan Ilham Aliyev. He informed that, according to the Order of the Head of State of November 7, 2017, on the occasion of the extraction of two billion tons of oil from the oil fields of Azerbaijan by an industrial method, a group of scientists was awarded a state award for merits in the development of the oil and gas industry, and according to the Order of November 27, 2017, chairman of the Ganja Division of ANAS, academician Fuad Aliyev was awarded the Order of Merit for the Homeland of the 3rd degree. Speaking about the information of the Commission of State Prizes of the Republic of Azerbaijan on Science, Technology, Architecture, Culture and Literature, Academician Akif Alizadeh noted that, the Commission had accepted the receipt of works for receiving state prizes for 2018, relevant documents and materials should be prepared in accordance with the rules, specified in the Regulations of the State Prize Commission and submitted to the Commission till April 1 of the next year.

Then, the meeting considered scientific and organizational issues. First of all Vice-President of ANAS, academician Isa Habibbayli spoke about the tasks connected with the implementation of the order of the head of state "On approval of the new composition of the State Commission of the Republic of Azerbaijan on language". Academician stressed that, in 1978 prominent political figure Heydar Aliyev achieved the status of the state language in the Constitution in the Constitution. Having said that in the years of independence important events were carried out at the state level aimed at further developing and enriching the Azerbaijani language and expanding the use of the mother tongue in the context of globalization, academician Isa Habibbayli added that, the orders of President Ilham Aliyev contribute to preserving the purity of the native language and its development through internal opportunities. After consideration of the issue, Department of Human Sciences was instructed to prepare jointly with the Institute of Linguistics after Nasimi ANAS and other relevant state organizations of the republic the draft of the Action Plan related to preserving the purity of the Azerbaijani language and improving the conditions for the use of the state language and submit it for discussion to the Presidium of ANAS.

Next on the agenda was the issue of registration of a number of legal entities as residents of LLC "Park of High Technologies of ANAS" ("Park VT"). In his speech Vice-President of ANAS, academician Ibrahim Guliyev noted that, at the meeting of the Expert Council of "Park VT" the views of "EPC Group" LLC and "DN TECHNOLOGIES" Ltd. were considered, by secret ballot a corresponding decision was made to grant the above-mentioned legal entities status resident of the Park. The Presidium approved the protocol on registration of these organizations as a resident.

The following issues was considered on the Action Plan related to the implementation of the activities envisaged in the "State Program for the Development of Cocoon and Sericulture in the Republic of Azerbaijan for 2018-2025" at ANAS. Academician-Secretary of the Department of Biological and Medical Sciences, academician Ahliman Amiraslanov said that, the main goal of the program, approved by the decree of the head of state Ilham Aliyev on November 27, 2017, is the implementation of measures aimed at strengthening state support to the development of cocoon and sericulture, which are among the priority ones spheres of agriculture, increase of export potential and provision of employment in rural areas. He stressed that in the plan of measures to implement the document, along with other organizations, important tasks are also set for the ANAS. Considering all the above, the Presidium approved the Action Plan for the implementation of the program. It was decided to provide a report on the work done to the Ministry of Agriculture of the Republic of Azerbaijan. To ensure coordination of activities within ANAS, as well as between the Academy and other performing organizations, a working group was established.

At the event, were adopted resolutions in connection with such issues as the approval of the Action Plan for holding the 85th anniversary of the Institute of Literature named after Nizami Ganjavi ANAS, creation of the Department of Social Affairs in the structure of the Office of the ANAS, the improvement of the activity of the House of Scientists of ANAS.