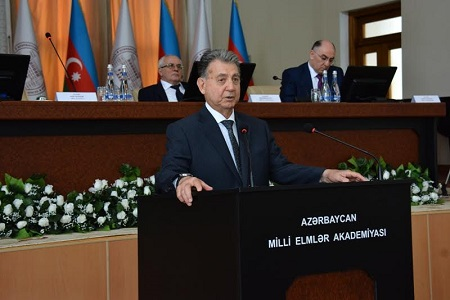 On May 24, at the enlarged meeting of the Presidium of th Azerbaijan National Academy of Sciences, was discussed an Action Plan drawn up to fulfill the tasks arising from the resolution of the General Meeting of ANAS April 28, 2017.

Speaking at the event, the president of ANAS, Academician Akif Alizade noted that the meeting discussed in detail the report on scientific and scientific-organizational activities of ANAS in 2016, a corresponding decision was adopted in connection with his statement. In the resolution, the Presidium of ANAS was given instructions on a number of issues, the forthcoming implementation in the academy in 2017.

After the discussions, the Action Plan was approved in connection with the implementation of the resolution of the General Meeting of ANAS from April 28, 2017.

The Action Plan included issues related to the continuation of the tasks set by President Ilham Aliyev regarding the development of science, ensuring active participation of ANAS in the implementation of the "Strategic Roadmaps of the National Economy and the Main Sectors of the Economy", giving preference to scientific research in priority areas of ANAS and other important issues.