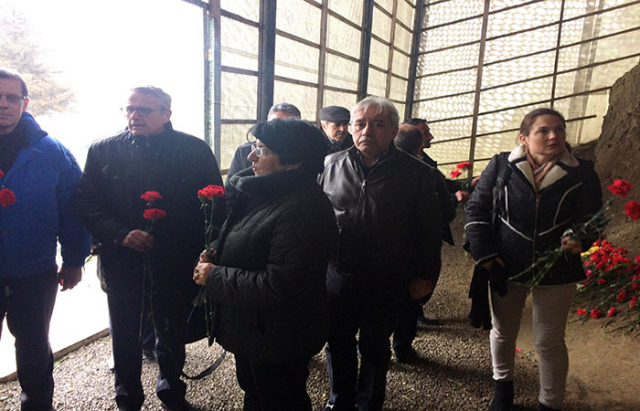 French scientists: Guba burial is a living example for bringing to the world community the true face of Armenian nationalists

On March 31, at the invitation of the Institute of Philosophy of ANAS, a group of scientists from the University of Sofia-Antipolis of France, Professors Christian Wallar, Xavier Latour, Pauline Turk and Claudine Terrazoni-Biblok visited the Guba Memorial Complex of genocide.

Director of the Institute of Philosophy, Professor Ilham Mammadzadeh told about bloody massacres and genocides committed by Armenians against our people throughout history. It was said that the one that went down in history as one of the most tragic acts of the genocide of the 20th century - the March genocide is especially notable for its scale and cruelty.

It was brought to the attention that the burial of the victims of the genocide in Guba was discovered on April 1, 2007 during excavations. After that, the staff of the Institute of Archeology and Ethnography of ANAS at the mass grave site began conducting extensive research work. As a result of the research it was found that the burial is connected with the genocide committed by the Armenians against the local civilian population in 1918.

It was noted that on September 18, 2013 the opening of the Guba Memorial Complex of the Genocide, created with the support of the Heydar Aliyev Foundation, was held.

French scientists, terrified by what they saw, noted that the Guba burial is a living example for bringing the true person of Armenian nationalists to the world community.

The excursion was supervised by the Doctor of historical sciences Solmaz Rustamova Tohidi.