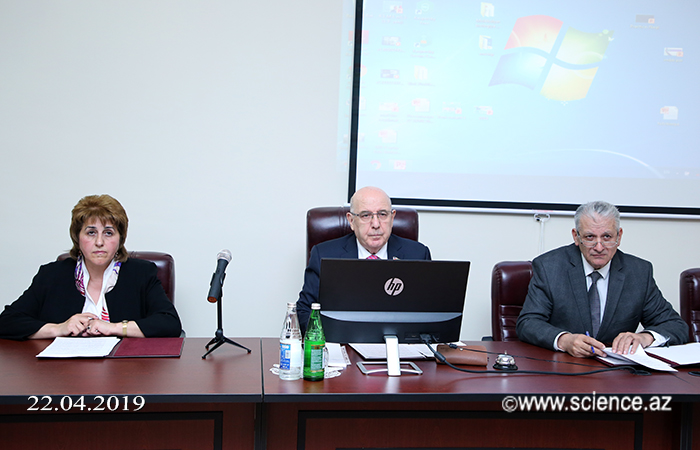 The General Meeting of the Division of Biological and Medical Sciences (DBMS) was held at the Institute of Molecular Biology and Biotechnologies of ANAS on April 22.

Academician Ahliman Amiraslanov opened the meeting and informed the participants about the issues on the agenda.

Then the scientific report of the correspondent member of ANAS Tarlan Mammadov made a report.

After the report was discussed, discussions were held and it was decided to recommend the report to the next meeting of the Presidium of ANAS.

At the event, proposals were made on the admission to the doctoral studies and the dissertation for the 2019 academic year's scientific institutions, and the decision to raise the number of places was made before the Presidium.

The decision of April 3, 2019 "On conducting the next competition for the scientific title of Professor of ANAS" and Decision of 25 January 2019 "On scientific and scientific-organizational activity of the Department of Biological and Medical Sciences of ANAS in 2018" have been discussed at the meeting. An appropriate commission consisting of members of the division was established to determine the candidates for the competition "Professor of ANAS".

Head of Hydrobiology Laboratory, Head of Hydrobiology Laboratory at the Institute of Zoology, PhD in Biology, Associate Professor Adil Aliyev was decided to award the Honorary Decree of the Division on the occasion of the 70th anniversary of Doctor of Philosophy, Associate Professor Dilshad Bayramov, leading scientist of the Guba Experimental Base of the Institute of Genetic Resources.

At the same time, acting director of the Central Botanical Garden, doctor of biological sciences, associate professor Vahid Farzaliyev, head of the Soil Science and Agrochemistry Institute’s Museum, PhD in Agrarian Sciences, Associate Professor Rena Mirzazadeh, as well as some employees of DBMS were presented Honorary decrees of the Division on Science Day.

At the event, the decision was made to send junior Researcher Aynura Pashayeva to South Korea and chief of the department Samira Rustamova to Germany.

In the end, a number of personnel issues were considered.