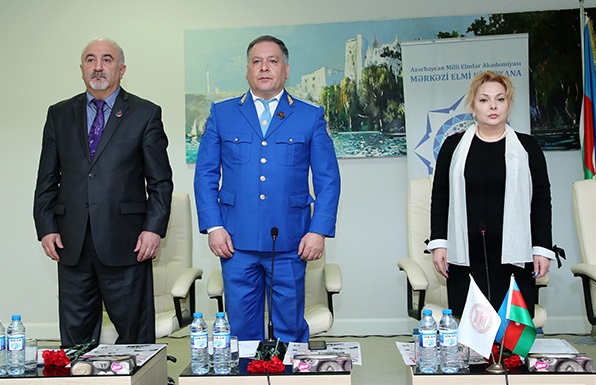 An event was organized by the Women's Council of the Institute of Zoology of ANAS on the theme "Blood memory of the history" dedicated to the 27th anniversary of the Khojaly genocide in the Central Scientific Library.

The event was preceded by an exhibition of Alovsat Gasimov, the chairman of the "International Reality of Garabagh Realities" International Exhibition, reflecting the Khojaly tragedy. A. Gasimov has created a very valuable historical photograph of "General Ali bey" that exposed the Armenian vandalism in 1992, photographes each of our compatriots who were unrecognized, tortured in Khojaly by Armenian daggers.

The event started with a minute of silence memory of the victims of the Khojaly genocide.

Director of the Institute, PhD in Physics-mathematics, Associate Professor Elman Yusifov has made a speech about political and legal assessment to this bloody crime by the national leader Heydar Aliyev and evaluated the genocide as one of the most horrible crimes in human history made against our nations in Khojaly with the help of the former Soviet soldiers of the Armenians 27 years ago. He spoke about the invaluable services of President Ilham Aliyev and the Heydar Aliyev Foundation in bringing the massacre to our people. Looking at the history of genocide and deportations committed against Azerbaijanis, Elman Yusifov said that this event, which has become our memory, should not be forgotten, memory of the victims of genocide should live forever in our hearts.

Then, Chairwoman of the Women's Council of the Zoology Institute, Ph.D., Associate Professor Yegana Mahmudova mentioned that important work has been done on recognition of the Khojaly genocide by the international community in Azerbaijan's foreign policy. She spoke about the importance of the international fair and justice campaign "Justice for Khojaly" in recognition of this genocide in the world. Y.Mahmudova said that the genocide of two countries in the world is genocide, and 11 countries, including the United States, are known as massacres.

The film "Anger", dedicated to the Khojaly genocide, was demonstrated at the end.