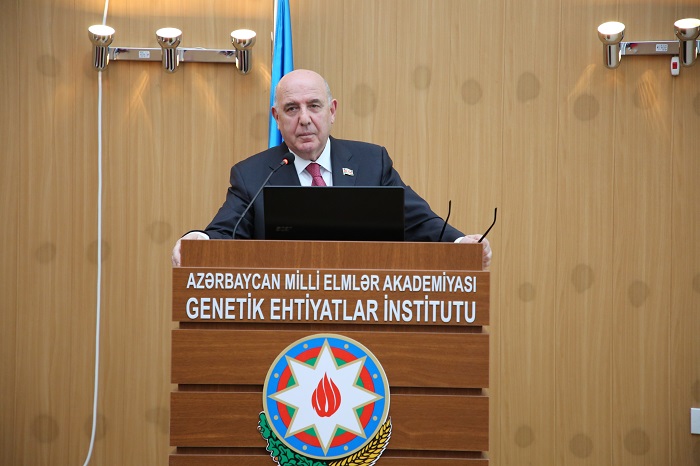 ANAS Institute of Genetic Resources held next meeting of ANAS Presidium on January 25. First of all, ANAS President, academician Akif Alizadeh informed on issues on the agenda.

Academician noted that, 255 research works on 91 topics covering 18 problems were carried out at the institutes of the Division at 461 stages. A number of multidisciplinary research programs were implemented by employees of scientific institutions. He added that, research was carried out in medical institutions outside the department, which covered 311 works, 140 topics and 31 problems, 296 research works on 106 topics covering 26 problems were continued in scientific and educational institutions of the agrarian profile.

Among events, speaker highlighted the 9th International Conference on "Research in photosynthesis and hydrogen energy in the name of sustainable development" and "Readings by academician Jalal Aliyev", which were held by ANAS, Division of Biological and Medical Sciences, Institute of Molecular Biology and Biotechnology ANAS and the International Society for Research in Photosynthesis. He added that, at the conference secretary of the International Society for Research in Photosynthesis, Professor Julian Eaton-Rai presented academician Jalal Aliyev Prize established to Professor Shenyang Zhian-Ren of the University of Okayama (Japan).

Speaking about the Division’s international relations, speaker noted that, were expanded scientific relations with organizations such as the Royal Botanic Gardens Kew (United Kingdom), the Free University of Berlin, Hanover, Frankfurt and Stuttgart Universities (Germany), the US Department of Agriculture, the Society of Botanical Gardens of the USA, Missouri Botanical Garden (USA), International Center for Agricultural Research in Dry Areas, International Center for the Improvement of Wheat and Corn, Wageningen University, and “Rijk Zwaan Breeding” (Kingdom of the Netherlands), National Institute for Agricultural Research of France, its centers in Bordeaux and Avignon, as well as the University of Montpellier, Institute of Gerontology of the Academy of Medical Sciences of Ukraine, Soil Institute after V.Dokuchayev (Russia), Central Siberian Botanical Garden of the Siberian Department of the Russian Academy of Sciences.

Noting that, in 2018 employees of the Division’s institutes participated in various national and foreign international competitions for grants, the scientist added that, based on 58 projects were funded by the Foundation for the Development of Science under the President of the Republic of Azerbaijan and some foreign foundations, joint research was conducted jointly with 32 foreign scientists.

Speaking about the training of scientific personnel in the institutes of the Division, the scientist noted that, in 2018 18 people entered the doctoral program, 15 - to the magistracy, 82 doctoral students and 139 disservers continued their research, 14 dissertations for the doctoral degree and 30 theses were defended for PhD degree, 11 theses for the degree of Doctor of science and 12 theses for PhD degree were prepared for the defense.

After listening the report were held discussions, it was decided to approve the report and include it in the annual report of ANAS.

Then, ANAS Presidium was adopted decision on making partial changes to the structure of the Institute of Dendrology of ANAS.