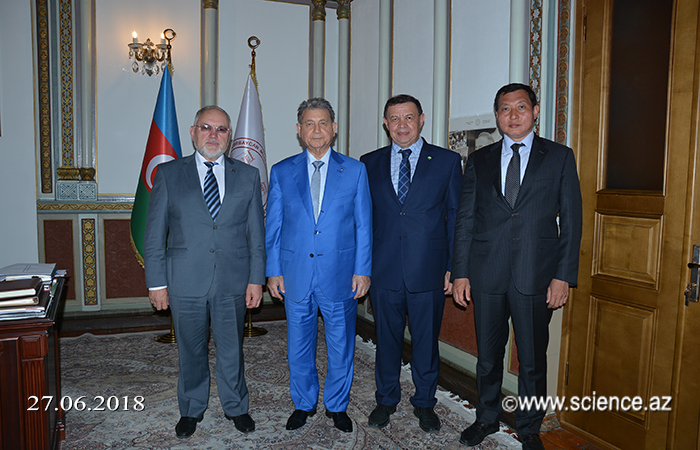 Relations with scientific centers of the Turkic world expand

At the meeting ANAS President, academician Akif Alizadeh informed the guests about the history of the scientific structure headed by him and the ongoing research held there. He said that, Azerbaijan National Academy of Sciences, which has a 70th history, made a significant contribution to the development of national and world science and achieved certain successes. Currently, Academy conducts research in the priority scientific areas that meet the requirements of world science, carries out innovative projects.

Informing about the High Technologies Park of ANAS, the scientist brought to attention that the main goal of the Park is to increase the state support aimed at sustainable development and strengthening the competitiveness of the economy, the expansion of innovative and high-tech areas, and the conduct of scientific research. He also stressed that, recently a number of important works in the field of agriculture, defense and other directions were carried out in the Park.

Told about the creation of the master's program in ANAS in 2015, academician A.Alizadeh said that, more than 200 undergraduates receive education in the academic magistracy. He added that, the main goal of the magistracy in the academy is to attract young scientists to science.

Then, the scientist told about the work done at the Academy in the field of the development of information and communication technologies (ICT). The head of ANAS noted that, the training of highly qualified personnel with scientific and practical experience in this field is one of the main goals.

Speaking about the international ties of ANAS, A. Alizadeh said that, the scientific center that he leads supports close cooperation with scientific institutions and organizations of many European countries, exchanges staff and experience.

Then, President of the Tatarstan Academy of Sciences of the Republic, academician M.Salakhov highly appreciated the activities carried out in ANAS and interdisciplinary research. Expressing interest in cooperation with ANAS in the relevant fields, he noted the expediency of carrying out scientific research with the participation of Azerbaijani scientists.

In order to study the experience of Azerbaijani scientists in the field of information technology, digital economy, mathematics, geology and geophysics, academician M.Salakhov invited scientists to read scientific lectures at the Tatarstan Academy of Sciences.