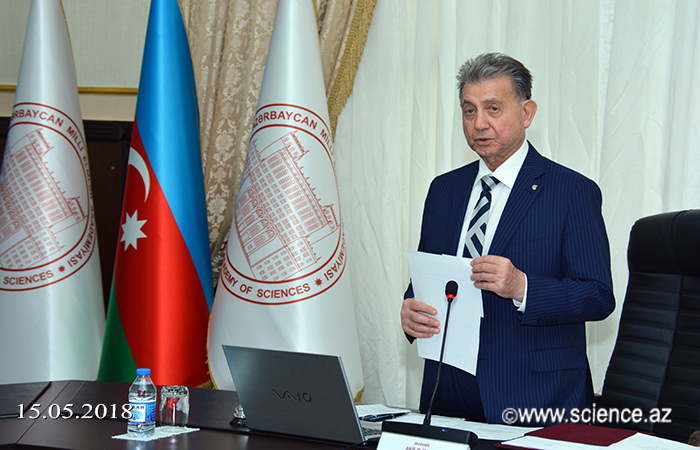 On May 15, the next meeting of Presidium of ANAS was held.

Firstly, academician Akif Alizadeh, president of ANAS, informed about the issues on the agenda.

Head of the Office of Administration of ANAS, Doctor of Political Sciences Fatali Abdullayev's report on "Activity of ANAS High Technology Park" listened at the event.

Then, scientific-organizational issues were considered. Firstly, the issue of holding the next General Meeting of ANAS was discussed. Academician-secretary of the ANAS, academician Rasim Alguliev spoke on the agenda of the meeting. The Presidium decided to hold the event on June 8 this year.

The meeting decied establishing an International Laboratory of Computer Genomics at the Institute of Genetic Resources of ANAS. Academician-secretary of the Department of Biological and Medical Sciences, Academician Ahliman Amiraslanov said that after the establishment of the Laboratory equipped with the New Generation Sequencing, significant achievements in the field of genome research have been achieved.

Presidium decided to establish an International Laboratory of Computer Genomics within the Biotechnology Department of the Institute of Genetic Resources, taking into consideration the indications and department requests.

Then, some structural changes were discussed. Presidium decided to establish Human Genetics Laboratory at the Institute of Genetic Resources and Mingachevir scientific and experimental station of the Institute of Zoology and partial change in the structure of the National Museum of Azerbaijan Literature.

Besides, the event was dedicated to the celebration of the 80th jubilee of outstanding scientist, talented educator and well-known surgeon urologist, professor, Honored Scientist, Head of the Department of Urology of Azerbaijan Medical University, correspondent member of ANAS Sudeif Imamverdiyev.

It was decided to award the scientist with the Honorary Decree of ANAS on the occasion scientist’s 80th anniversary, taking into account the long-term productive and effective scientific activity, important services in the development of medical science in our country.