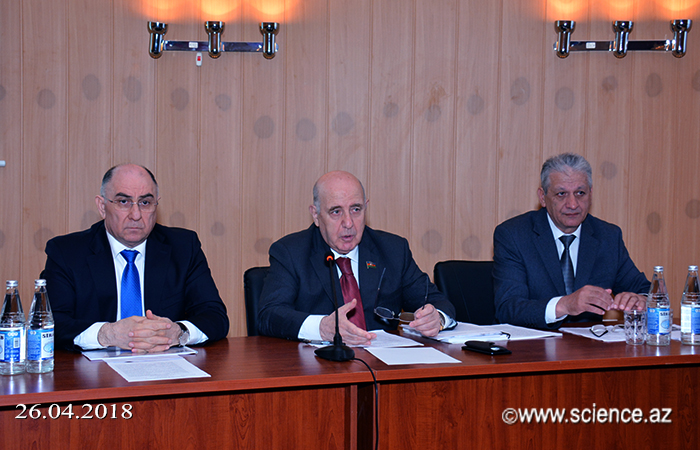 On April 26, a regular meeting of the Department of Biological and Medical Sciences of ANAS was held.

The event was attended by members of the office bureau, heads of scientific institutions, professors of ANAS for separation and invited employees on relevant issues.

First academician-secretary of the department, academician Ahliman Amiraslanov brought to attention the issues on the agenda.

Director of the Institute of Genetic Resources, Corresponding Member of ANAS Zeynal Akparov highly appreciated the modernization of the network infrastructure of its structure and noted that, the staff of the Institute of Information Technologies has great merit in this work. Z.Akparov stressed that, the activities in this direction will continue.

Then the report on the results of scientific and scientific-organizational activities of the branch in 2013-2017 was discussed. After the discussions, it was decided to submit a report to the Presidium.

The next issue on the agenda was related to the plan for admission to the doctoral studies and dissertations of scientific institutions of the WMS for 2018. It was noted that this year 15 people entered the doctoral program on the PhD program. After the discussions, proposals were put forward and appropriate decisions were made.

At the event, Department of Molecular Systemology of the Institute of Genetic Resources, Dr. of Biology Naib Aminov in connection with the 80-year-old, director of the Center for Applied Zoology of the Institute of Zoology, Ph.D. in Biology, Barat Akhmedov - 70-year-old, chief researcher of the Laboratory of Invertebrate Sushi, Dr. of Biology Sujaddin Guliyev - 70 years of jubilees were awarded the Honorary Diploma of the Ministry of Defense. The meeting also discussed issues related to the 80th anniversary of correspondent member of ANAS Sudeif Imamverdiyev, the 80th universary of the chief researcher of the Laboratory of Plants Cultivated in Closed Conditions, the Central Botanical Garden, Professor Arif Bayramov, the 75th birthday of the Head of the Floriculture Laboratory of the Central Botanical Garden, Doctor of Philosophy in Biology Asaf Iskenderov, 85th anniversary of the Scientific Secretary of the Institute of Physiology, PhD in Biology Zemfira Jafarova.

In addition, the meeting decided to raise an application to the Presidium of ANAS for the introduction of changes in the structure of the Institute of Genetic Resources and the Institute of Zoology.