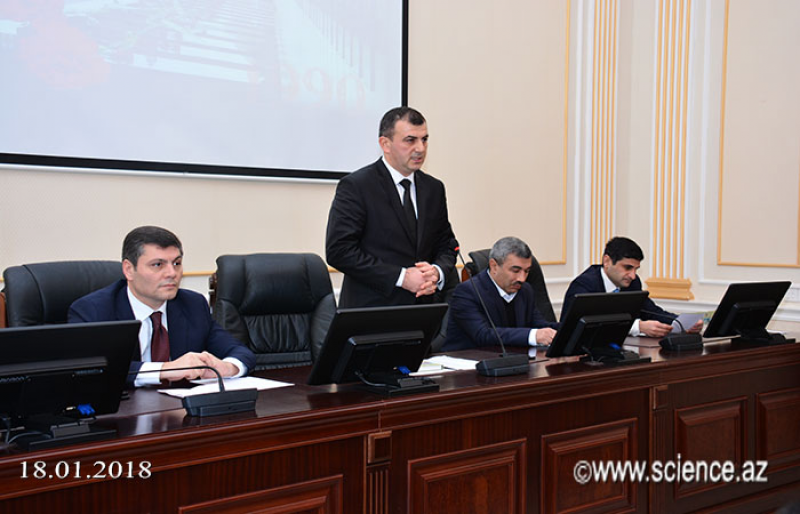 Council of Young Scientist and Specialists of ANAS (CYSS) held an event devoted to 28th anniversary of 20 January tragedy at ANAS main building.

Within the framework of the event there was a presentation of the book of the Director of the Fund Jan. 20 Shovgi Bunyatov - "The Role of the Events of January 20 and April Fights in the Development of Our National Spirit", which was published with the financial support of the Council of State Support of Non-Governmental Organizations under the President of the Republic of Azerbaijan.

In the beginning by a minute of silence was honored the memory of the martyrs.

Then, the chairman of the CYSS, Ph.D. in Physics, associate professor Famin Salmanov in his speech spoke about the role of the January 20 tragedy in the development of national thinking about the independence and freedom of the Azerbaijani people. In order to suppress the people's struggle for national freedom and democracy, Soviet troops invaded Baku, resulting in 146 people being killed, 144 people injured, and 841 people illegally arrested.

It was noted that, the first political assessment of these bloody events was given by the national leader Heydar Aliyev on January 21, 1990 at a meeting held in the permanent representation of Azerbaijan in Moscow. The instigators of the tragedy were sharply criticized by the great leader.

The chairman of the CYSS noted that, today the modern Azerbaijan Republic has a great political, economic and military power, as evidenced by the victory defeated by the Armenian troops in the April 2016 battles.

Further Shovgi Bunyatov informed the participants of the event about his book. He said that, the publication is devoted to the analysis of two important events of the recent history of Azerbaijan - the tragedy of January 20 and the April battles of 2016. It was said that, the book compares these events, explains the significance of the unity of the leader-nation. Sh.Bunyatov noted that the publication also presents speeches, statements, orders and decrees of the great leader Heydar Aliyev and Azerbaijani President Ilham Aliyev related to the relevant events.

At the event, the research associate of the Institute of Oriental Studies, Ph.D. in history, assistant professor Subhan Talibli, doctoral candidate of the Azerbaijan State Academy of Management Mazahir Efendiyev and others spoke about the political processes that took place in our country on the eve of the January 20 tragedy, as well as the legal assessment that was given to these events.