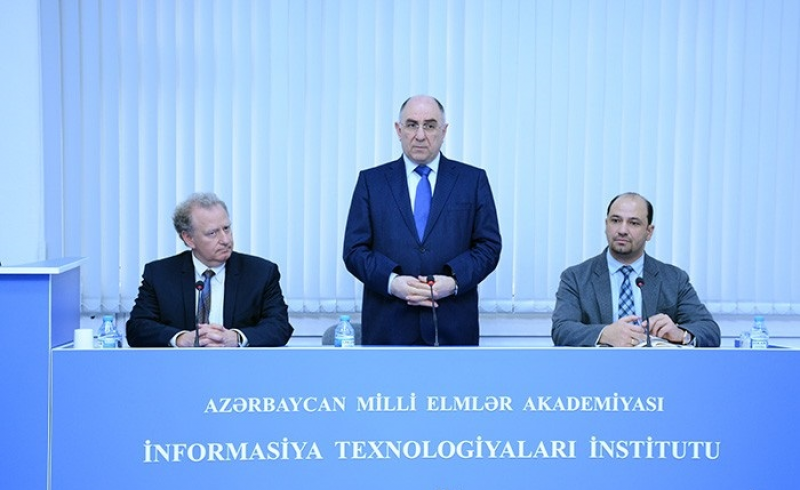 At the Institute of Information Technology of ANAS the meeting was held with Director of French-Azerbaijan University (UFAZ) Vazeh Askerov, Director of Comprehensive Systems and Bioinformatics of ICUBE Laboratory at Strasbourg University, UFAZ Computer Science Director, Professor Pierre Collet. Academician-secretary of ANAS, director of the Institute, academician Rasim Alguliev and members of the Scientific Board of the Institute participated in the meeting.

The purpose of the meeting was to discuss bilateral cooperation between UFAZ and the Institute of Information Technology of ANAS.

Opening the event, academician Rasim Alguliev noted that the country's leadership has given special attention to the international integration of science and education and has initiated the establishment of UFAZ in 2016 on the initiative of the Presidents of the Republic of France and the Republic of Azerbaijan.

The scientist noted that the UFAZ established under the Azerbaijan State Oil and Industrial University (ADNSU) targets to establish and develop mutually beneficial, high-level, long-term scientific and technical cooperation relations for France and Azerbaijan, promote reforms in the higher education system in Azerbaijan, French and English language professionals. The academician expressed his confidence that this university will make a great contribution to future education in the future.

Later, Professor P.Collet announced that students at the UFAZ undergraduate degree in chemistry, computer sciences, geophysics and oil and gas engineering would graduate in 2020 and for the first time they would get a University degree along with the ADNSU alumni, the University of Strasbourg or Renn 1.

P.Collet reminded that the issue of use of supercomputer was discussed during the meeting held in September of this year between the president of ANAS, academician Akif Alizadeh and president of the French Foundation for Chemical Studies Bernard Menen.

Scientist pointed out that this supercomputer based on the GPGPU system was declared a winner in the contest held at The Genetic and Evolutionary Computation Conference (GECCO). The reporter said that said the projects would be implemented in UFAZ by using this supercomputer to make artificial intelligence, optimization, modeling, image processing, and so on.

Later UFAZ Director Vazeh Askerov emphasized that the university which he headed was one of the universities of special importance in the region, along with Azerbaijan. He noted that UFAZ has enabled citizens of the Republic of Azerbaijan to obtain higher education in accordance with the French educational and scientific standards without leaving the country.

At the meeting, discussions were held on establishing cooperation with the Institute of Information Technology to coordinate the UFAZ supercomputer with Data Center and provide broadband Internet traffic. In the future, the importance of expanding bilateral cooperation in this area was emphasized. It was suggested that this supercomputer be connected to the AzScienceNet network and access to the European Science and Education Network (GEANT) and the AzScienceNet Data Center's capabilities. It will also be possible to use the capabilities of the supercomputer to be installed at UFAZ via AzScienceNet.

http://science.gov.az/news/open/6986
Share
© All rights reserved. Citing to www.zoologiya.az is necessary upon using news