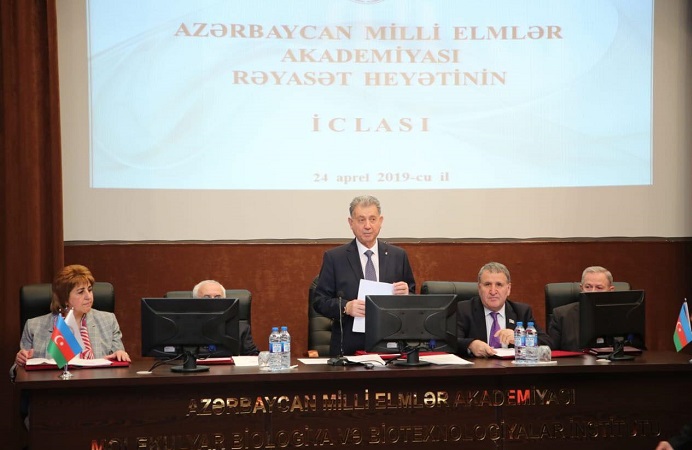 On April 24, the next meeting of Presidium of ANAS was held at the Institute of Molecular Biology and Biotechnology of Azerbaijan National Academy of Sciences.

The event was opened by academician Akif Alizadeh, President of ANAS, and told about the issues on the agenda.

Then a number of scientific-organizational issues were considered at the meeting. Firstly, the implementation of the decision of the General Assembly of the ANAS on 8 June 2018 was discussed. Academician Akif Alizadeh said that the scientific potential of the academy in relevant institutions and organizations in last year was aimed at ensuring the country's defense, energy, ecological and food security, expanding its innovation activities, strengthening space exploration and forming a new chemical industry based on the priorities of the Academy.

The work carried out in the direction of solution of social problems of the academicians of ANAS has been continued last year. He also noted that the necessary work was carried out to ensure the place of living of the doctoral and masters of ANAS during the study period, and the importance of implementing relevant measures in the field of providing scholarships to academics.

After the discussion, the Presidium considered satisfactory the works on the implementation of the 8 June 2018 decision of ANAS General Assembly.

The meeting touched upon academician Vagif Farzaliyev's 80th Jubilee. It was decided to award the scientist with the Honorary Decree of ANAS, to prepare the bibliography, to hold the anniversary meeting. Other decisions were made to celebrate the 110th jubilee of corresponding members of ANAS - Kazim Alekperov and Mammad Emin Salayev.

The Presidium has also decided to take appropriate measures connected to the announcement of 2019 as the “Year of Nasimi” and to make partial changes in the structure of the Institute of Additives Chemistry.

In addition, the Law and HR departments of the Presidium have been merged with the Department of HR and Law Enforcement.

In the end, the personnel issues were considered. Corresponding member of ANAS Dadash Huseynov has been appointed as deputy director of the Institute of Geology and Geophysics, PhD in geology and mineralogy Yegana Latifova as scientific secretary of the enterprise.