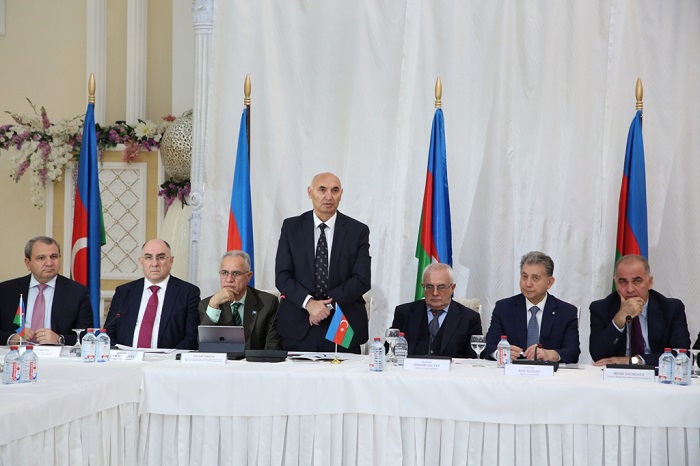 Participants of the event commemorated national leader Heydar Aliyev at the monument in the center of Goychay.

Opening the conference, Academician Akif Alizadeh, the president of ANAS, expressed his deep gratitude to the leadership of the city executive authority on behalf of the scholars for high hospitality.

Akif Alizade said that Azerbaijani scientists are implementing a number of important measures to develop the agrarian sector, ensuring food security and raising material wellbeing, and the conference is dedicated to the pomegranate plant and multidisciplinary problems of its products.

World-class level researches at biology was carried out at the academy, and the research on "Establishing a robust system for identification, storage and rational use of plant genetic resources at the genome and transcriptus level", which was carried out at the Institute of Genetic Resources of ANAS, the development of traditional agricultural crops in a number of state programs is one of the main directions. Pomegranate has an important role after the nuts in the list of plants for Azerbaijan, te scientist added.

The scientist also emphasized that for the first time as a result of joint cooperation of ANAS and UN Food and Agriculture Organization, the coordination of local varieties of pomegranate plant in more than 10 regions of Azerbaijan was mapped. For the first time “Azerbaijani guloysha” sort are recorded by the US National Center for Biotechnology Information (NCBI)."

Akif Alizadeh noted that the current roadmap for improving the economic characteristics of the genome pomegranate plant, which was obtained as a result of the reading of the pomegranate genome, would allow the genome data to be directly associated with economic significance.

Then Deputy Minister of Agriculture of the Republic of Azerbaijan Seyfaddin Talibov congratulated the workers on the occasion of the 1st November Agricultural Workers' Day.

S.Talibov spoke about the importance of reforms in agrarian sphere, which is one of the leading spheres of the economy. He expressed confidence that, the socioeconomic indicators in the agricultural sector have increased, and that the reforms in this direction will give greater results.

Mehdi Salimzade, head of the Goychay District Executive Power, said he was glad to see the conference participants in the city. Congratulating the guests on the pomegranate holiday, he wished success to the conference.

The head of the region informed about the achievements in the socio-economic development and agriculture in the region.

Ghulam Isaczai, UN Resident Coordinator and UNDP Resident Representative in Azerbaijan emphasized the state's support for science in Azerbaijan and spoke about the importance of joint projects with UNDP.

Head of the UN Food and Agriculture organization’s Office for Partnership and Coordination in Azerbaijan Melek Chakmak said that, Azerbaijan has great potential in agrarian sphere and has achieved significant achievements in recent years. The head of the office also informed about the organization's projects and programs in Azerbaijan.

Academician-secretary of the Division of Biology and Medical Sciences of ANAS, academician Ahliman Amiraslanov delivered a speech on the subject "Pomegranate plant and human health" at the conference. The scientist talked about the wide use of pomegranate in traditional medicine and modern medicine, its healing properties in stomach diseases, asthma, angina, sinus, atherosclerosis and many illnesses, the healing properties of pomegranate crust against cancerous types, as well as the benefits of pomegranate oil in arteries.

Director of the Institute of Genetic Resources, corresponding member of ANAS Zeynal Akperov said that President Ilham Aliyev pays special attention to the increase of production of agricultural products with high export potential for non-oil sector development. He reminded that many decrees were signed in connection with it.

Zakir Akbarov made a presentation on "The Biological Diversity of Pomegranate in Azerbaijan".

The conference continued with discussions on reports.

Then the conference resolution was adopted.

According to the resolution, it is expedient to take into account the importance of discussions, analyzes and proposals in the production, processing, storage, consumption and export potential of pomegranate and its products, and the importance of scientific research in this area. In addition, the resolution includes the preparation of research programs with the involvement of pomegranate genetic research, biotechnology, genetic engineering.

At the end of the conference certificates and awards were presented.