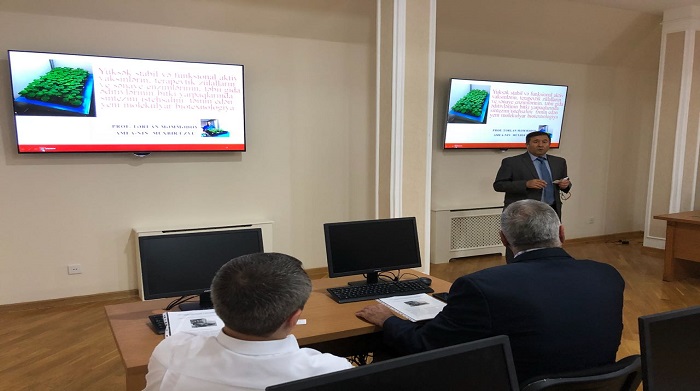 The scientist noted that, the organization of the creation and production of vaccines, industrial and human enzymes, natural food additives using DNA technology is one of the most important problems of the modern era. He brought to the attention that, at present the production of recombinant proteins of medical and industrial importance is carried out through a number of expressive systems - bacteria, yeast fungi, insects, mammals and others.

The scientist stressed that, since in recent years plant expressive systems are considered promising in terms of economics and safety, they are widely used in manufacturing: "In some cases, when the system is incompatible with the production of proteins of this type, it becomes necessary to address new molecular biotechnology to eliminate this problem. To this end, more advanced technologies are being developed".

T.Mammadov brought to the notice that, for the first time with the use of this technology, a new generation of vaccines, successfully synthesized in plants from malaria, was prepared.

The reporter noted that the achieved results were patented and published in the influential magazine "PLOS ONE". He also said that this technology creates great opportunities for the synthesis of various recombinant and therapeutic proteins, vaccines, natural food additives, as well as industrial enzymes.

Professor added that, the production and introduction of recombinant proteins into the market in the country will lead to great economic benefits. "The production of valuable medicines intended for humans and animals will reduce our country's dependence on the import of these products."

After listening to the report, proposals were put forward on the economic effectiveness of recombinant proteins, the production of valuable drugs in the Park of High Technologies.