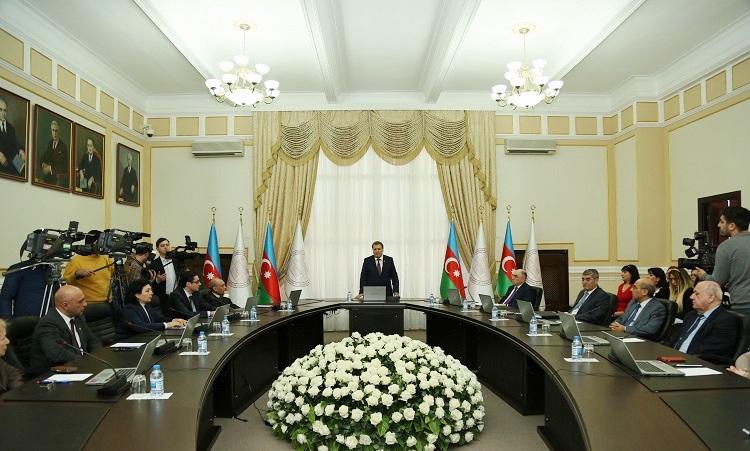 The important tasks have been set up in the State Program on the use of Azerbaijani language in accordance with the requirements of time in the conditions of globalization and the development of linguistics in the country, approved by the decree of President Ilham Aliyev dated April 9, 2013. In connection with the issue Institute of Information Technology of ANAS carried out purposeful work and National Terminology web portal was developed by scientists and specialists of the Institute.

On March 6 at the Presidium of ANAS the presentation of the National Terminology web portal www.terminology.az has been held. The event was attended by academics and experts of the scientific-research institutes of ANAS, as well as media representatives.

Opening the event, academician Isa Habibbayli, vice-president of ANAS, said that the language, which is one of the most important attributes of each state, is a phenomenon reflecting the identity, culture and psychological characteristics of the people and the country.

The national policy on protection and development of the academic Azerbaijani language has been laid by national leader Heydar Aliyev. At the new stage of development, the President of the Republic of Azerbaijan, Ilham Aliyev, successfully pursued this policy and emphasized that he paid special attention to multifaceted factors.

Academician-Secretary of ANAS, Director of the Institute of Information Technology, academician Rasim Alguliev said that national leader Heydar Aliyev always attached great importance to the protection and development of our language. In his speech at the 70th anniversary of the ANAS, President Ilham Aliyev noted the importance of preserving and improving the purity of our language.

According to R. Alguliyev, due to the rapid development of Internet technologies, access to information resources available in virtual space is not limited.

The National Terminology web portal is an open national information resource used dynamically developing Internet environment, R. Alguliev said that electronic terminology is an integral part of the e-science, one of the segments of "Electronic Azerbaijan", which is being formed in the country.

According to the academician of the National Academy of Sciences, the National Terminology web portal will create enormous opportunities as a result of ensuring transparency and equity for the protection of the copyright of scientists and experts who have prepared terminology dictionaries.

The scientist expressed his confidence that the system will contribute to the development of terminological activities in the country, as well as rendering electronic terminology services to citizens.

Head of the State Committee for Standardization, Metrology and Patents Fazil Talibov said that important tasks were set before the relevant bodies in the "State program on the use of Azerbaijani language in accordance with time requirements in the conditions of globalization and the linguistic development in the country" approved by President Ilham Aliyev's April 9, he said.

Then, scientific employee of the Institute of Information Technologies Yusif Sadiyev presented the national terminological web portal and gave detailed information about its structure and design. The portal, created under the name of www.terminology.az (www.azterm.az), stated that "Requirements for Creating and Management of Internet Information Resources of the State Authorities", approved by the Decision of the Cabinet of Ministers of the Republic of Azerbaijan dated 4 September 2012, including the requirements of the Special State Protection Service of the AR and security has been provided.

One of the most important features of the portal is the possibility of establishing online communication between the Terminology Commission and the citizens through the "Public Tribune" section. In the section, it is possible to propose new terms and topics for discussion, as well as to comment on existing terms.

The director of the Institute of Linguistics, academician Mohsun Nagisoylu, the head of Terminology Department of the same institution, Doctor of philological sciences Sayali Sadigova and others said that the web portal will play an important role in the achievement of scientific achievements in the field of terminology in Azerbaijan.