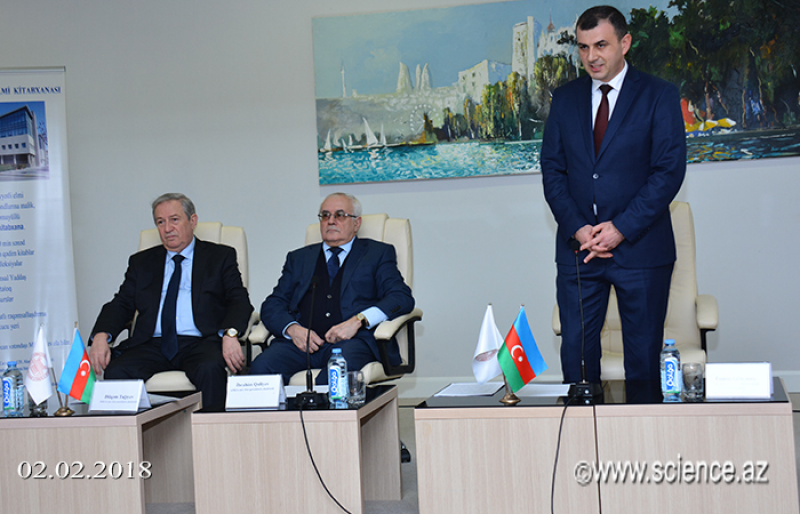 Central Scientific Library hosted a meeting devoted to the results of the 2017 academic year of the Young Scientists and Specialists Council (YSSC) of ANAS.

Academicians - Ibrahim Guliyev, Dilgam Tagiyev, Academician-Secretary of the Department of Earth Sciences, academician Fakhraddin Gadirov, Executive Director of the Foundation under the President of Azerbaijan Ogtay Samadov and young scientists participated at the meeting.

Chairman of YSSC, PhD in physics, associate professor Famin Salmanov made a report on the activity of the organization for 2017. YSSC has done a lot to develop the potential of Azerbaijani youth in accordance with the requirements of modern times, to use this potential for the benefit of the state, as well as to form an active citizenship position in the new generation, the speaker underlined.

Important scientific results were achieved with the participation of young scientists from Molecular Biology and Biotechnology, as well as the Additives Chemistry Institute, and published in international impressive magazines, chairman emphasized.

F.Salmanov said that in the reporting year the books, monographs, articles and theses of young scientists and specialists of ANAS were published, and works on propagation and popularization of science will continue.

Discussions were held after the report was listened.

Academician Dilgam Taghiyev congratulated young scientists on February 2 - Youth Day. He said that as a result of the reforms carried out in ANAS in recent years, the interest of young people in science has increased and high results have been achieved during the academy's admission to master's and doctoral degrees. D.Tagiyev noted that summer schools will be organized for young scientists this year and will be held for young employees.

At the end, the report was adopted unanimously.