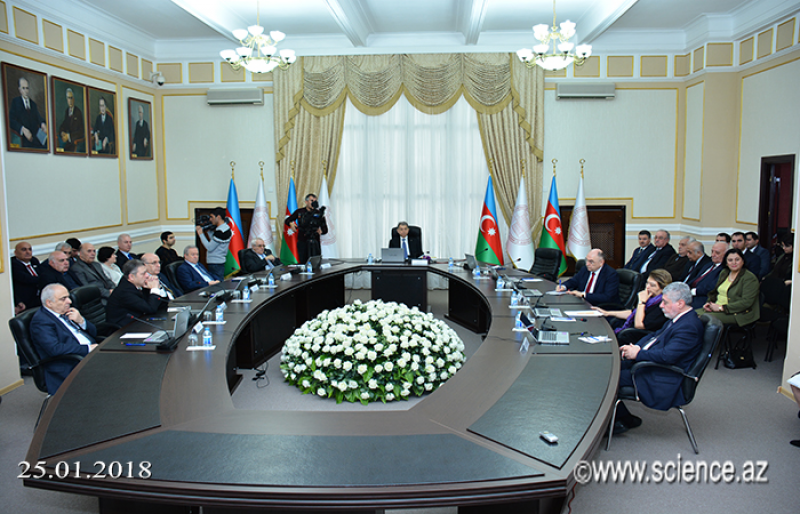 Presentation of the book "ADR-Iran diplomatic relations in the light of the documents of the Caucasian Emergency Commission (1919-1920)" was published at the Presidium of ANAS on January 25 by the head of the Presidential Administration of the Republic of Azerbaijan, academician Ramiz Mehdiyev.

The head of ANAS noted that in the new book presented by academician Ramiz Mehdiyev to the public, the facts about the important moments of our history, based on archive materials and important documents are of great importance.

According to academician A.Alizadeh, researches and results obtained in the book, which is a novelty for the history of the country, will give an impetus to future multidisciplinary research in the academy in priority areas.

In the current year ANAS jointly with the relevant organizations intends to carry out scientific research and activities and carry out complex projects in the direction of study of the history of the ADR. A number of events dedicated to the 100th anniversary of ADR were held in Turkey, France and Russia, academician I.Habibbeyli noted.

Vice-president of ANAS emphasized the importance of the new book and lined out the necessity of further strengthening of independent statehood.

98 documents were presented to the scientific community for the first time and reviewed the role of the Azerbaijan Democratic Republic in the development of Azerbaijani statehood and analyzed the diplomatic correspondence during that period. The book reflects new materials about M.A.Rasulzadeh, Fatali Khan Khoyski, Hasan bey Agayev and other leaders of the republic, the scientist line out.

Director of the Institute of History, academician Yagub Mahmudov noted that Azerbaijan has a common history with Iran, stressing the importance of studying this history and transferring it to future generations.

Director of the Institute of Oriental Studies, Academician Govhar Bakhshaliyevamade a speech at the event and appreciated the book in terms of studying the history of Azerbaijan and expressed its gratitude to all scientists and experts who are involved in its development.

Director of the Institute of Caucasian Studies, correspondent member of ANAS Musa Gasimli said in his speech that the works of academician Ramiz Mehdiyev are of great importance for the history of Azerbaijan. The original and diplomatic style is preserved during the translation of the archive materials used in the writing of the book, which played a great role in bringing the facts to the reader more accurate, the scientist underlined.

At the end, the translator of the book, Shahin Yahyaev shared his views on the book.