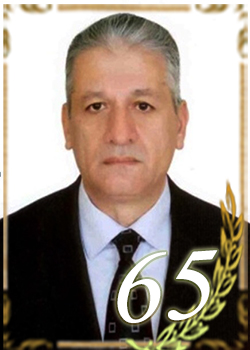 Zeynal Akperov, well-known scientist in the field of plant genetic resources, director of the Institute of Genetic Resources, correspondent member of ANAS, is 65 on September 27.

Zeynal Iba oglu Akperov was born in 1952 in Privolny village, Jalilabad. In 1978 he graduated from the Azerbaijan Agricultural Institute (now Azerbaijan State Agrarian University), and in 1981 graduated.

He was nominated for a degree in physiology at the Institute of Physiology and Biochemistry of the Academy of Sciences of the Republic of Moldova in 1987 on theme "Photo-synthesis activity, providing high-quality and high-quality product from soybean" (scientific leader: academician Jalal Aliyev) and in 2010, defending his doctoral dissertation on " Studying and selection of plant genetic resources in Azerbaijan " (scientific consultant: academician Jalal Aliyev).

Since 2003 he is the director of the Institute of Genetic Resources of ANAS.

As a result of the research carried out by the scientist, some of the rare and pneumothoric species belonging to the wild herbs of cultivated plants have been identified and the dangers of loss have been issued. In addition, a new classification of plant genetic resources has been developed and new methodologies for protection strategies have been proposed.

According to Z. Akparov, photosynthesis properties have been determined to ensure high quality products from soybean crops, depending on the sorting characteristics and mineral nutrition. His research has developed an intensive cultivation technology that ensures high productivity of the soybeans in irrigation.

He has been involved in the creation of 8 regionalized varieties for agro-climatic zones in different parts of the republic, and co-author of up to 15 types of perspective forms and types.

For the first time in the region, at the initiative of the scientist, the Genomics Laboratory was established at the Institute of Genetic Resources, equipped with the New Generation sequences. Here, the initial experiments on genomics were performed on wheat, barley and their wild ancestors, and for the first time in Azerbaijan, the genotyping of approximately 700 wheat and barley samples, stored in the National Genbank.

He is a senior editor of the Genetic Resources Crop Evaluation, a member of the editorial board of the "Journal of Biological Sciences" and "Agrarian Science of Azerbaijan", and the Editor-in-Chief of the Scientific Works of the Institute of Genetic Resources.

He is the Chairman of the Scientific and Technical Council, which is included in the Conservation and Efficient Use Management System of Genetic Resources of Cultural Plant created by the Decree of the Cabinet of Ministers of the Republic of Azerbaijan in 2013. He is a member of the Expert Council on subsidizing seed and sowing materials of the Ministry of Agriculture.

Under the scientific guidance of Z. Akparov, 1 doctor of sciences, 5 PhDs have been trained. He has made presentations at conferences held in about 50 countries around the world. The results of his research were reflected in 175 scientific papers (85 abroad), including 5 books, 3 monographs, 2 brochures, 2 recommendation and 8 patents.

The scientist's activity was highly appreciated by our state and he was awarded the honorary title "Honored Scientist" by the Order of the President of the Republic of Azerbaijan in 2015.

We congratulate well-known scientist on the occasion of his 65th anniversary, wish him strong health and creative successes in the progress of the Azerbaijani genetic science.