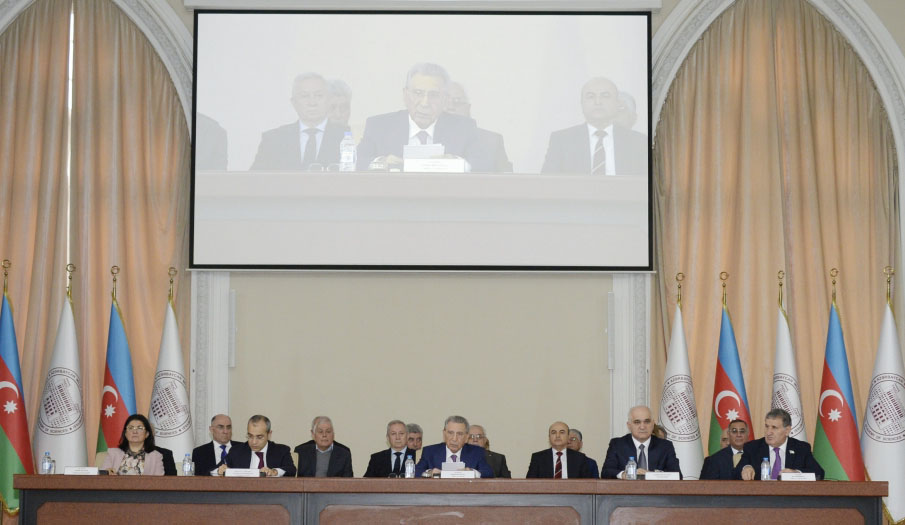 General Meeting of ANAS was held

On December 28, General Meeting of the Azerbaijan National Academy of Sciences was held.

Opening the event, President of ANAS academician Ramiz Mehdiyev informed about the issues on the agenda of the General Meeting. He noted that in modern conditions the future of each state, its economic, political and military power are directly related to its scientific potential. The country's long-term development strategy, as well as global economic problems existing in the modern world, stipulate that Azerbaijan should develop, relying on intellectual resources. Therefore, the development of science is one of the main priorities of state policy in Azerbaijan.

Having said that the Academy is currently facing completely new tasks, Academician Ramiz Mehdiyev said that these tasks are due to the development trends of world science, as well as the main directions of the country's development strategy. He noted that, despite certain successes, there are a number of shortcomings in the activity of ANAS, for the elimination of which urgent measures should be implemented. The Academy should take an active part in the implementation of important state programs, carry out the function of the main expert in scientific and technical projects. Having said that the participation of scientists in international and national and regional scientific projects implemented by the state is not up to standard, Academician Ramiz Mehdiyev added that serious steps must be taken in this area. He said that it was necessary to reconstruct such areas as the development of the non-oil sector, the commercialization of scientific results and the strengthening of innovative activities. Academician Ramiz Mehdiyev emphasized that in order to eliminate all these shortcomings, the ANAS structure should be thoroughly reconstructed, its development goals, priorities, mechanisms for participation in the implementation of state policy should be precisely defined, and effective measures should be taken in this direction.

The President of ANAS, academician Ramiz Mehdiyev urged the intelligentsia, especially the thousands of Academy staff to mobilize their forces even more responsibly and purposefully for the successful implementation of the scientific policy of the President of the Republic of Azerbaijan Ilham Aliyev.

In connection with the first issue on the agenda, the floor was given to the academician-secretary of ANAS, corresponding member of ANAS Aminaga Sadigov. Speaking about the main provisions of the “Development Program of the Azerbaijan National Academy of Sciences for 2020-2025”, corresponding member of ANAS Aminagha Sadigov said that the presented program covers such tasks as setting research priorities, carrying out structural reforms and improving management, modernizing the scientific infrastructure, improving the financing of science, etc. He noted that the program also reflected such important issues as strengthening the integration of science, education and the economy, expanding entrepreneurial and innovative activities and applying scientific results. Talking about each item in the program in detail, ANAS corresponding member Aminagha Sadigov touched upon issues such as determining scientific priorities taking into account the tasks that the government has set for ANAS, transferring the center of gravity of management to scientific institutions during structural reforms, indexing labor while financing science, and applying the world practice in integrating science, education and economics. Then Aminagha Sadigov said that ten pilot projects will be implemented as part of the program.

The issue of amendments to the Charter of ANAS was also discussed at the event. Vice President of ANAS, academician Isa Habibbayli said that the Charter of ANAS is the main normative and legal document regulating the activity of the Academy. He said that the first Charter of ANAS in the years of independence was approved by national leader of our people Heydar Aliyev in 2003, and then in 2014 it was substantially revised. This document has played an exceptional role in the development of the Academy over the years of independence.

Academician Isa Habibbayli noted the need for amendments to the Charter in connection with the adoption of the Law of the Republic of Azerbaijan on Science in 2016, as well as improvement of the Academy's activity.

The document contains specific items related to entrepreneurship and innovation activities, which determines new scientific directions such as definition of income from entrepreneurship in the field of science, improving the social status of the Academy staff and the development of this scientific institution etc.

Following the discussions, Charter of ANAS was adopted in the new edition with amendments.