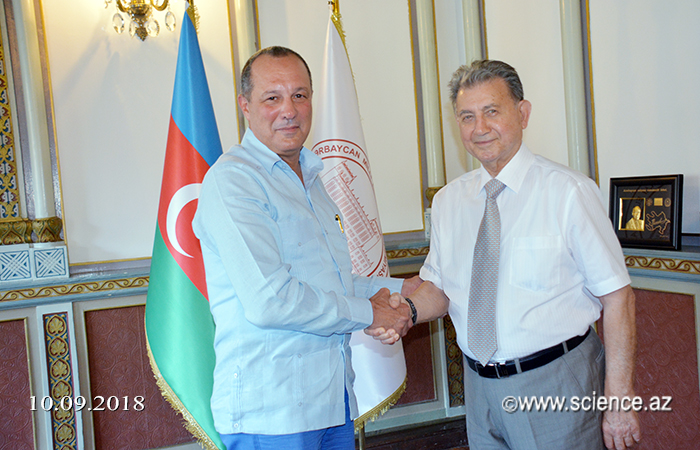 ANAS President met with the Ambassador of Cuba in our country

On September 10, ANAS President, academician Akif Alizadeh held a meeting with Ambassador Extraordinary and Plenipotentiary of the Republic of Cuba to Azerbaijan Alfredo Nieves Portuondo.

At first, academician Akif Alizadeh informed the guest about the history of the creation of the ancient center of science he directed and his main directions, informed the guests about the history and main scientific directions of the center of science that he directed. He noted that, ANAS, which has been functioning for more than 70 years and is at a new stage of development, is conducting research in priority areas, establishing links with influential scientific centers of the world. Academician A.Alizadeh informed the ambassador that, Azerbaijani scientists are leading important scientific projects in the CIS countries, as well as in the leading scientific centers of Europe, including that the doctoral students of scientific institutions of ANAS have been practicing in these scientific centers.

Informing about the High Technologies Park of ANAS, A.Alizadeh brought to the attention that this institution carries out successful activity in the field of expanding the spheres of application of innovations and high technologies based on modern scientific and technical achievements.

Ambassador Alfredo Nieves Portuondo further expressed his gratitude to the leadership of ANAS for the warm welcome. The diplomat informed about the history, geographical position, achievements and culture of his country and touched upon the importance of developing relations between the two countries in the field of science and education. He expressed confidence that this cooperation will bring effective results.

The ambassador said that, his country is famous in the world for its achievements in the field of health. He noted that, Cuba has a great potential for cooperation with relevant scientific institutions in the field of medicine and biotechnology.

The diplomat noted that, at one time Cuban students went to Azerbaijan to practice in the developed oil and gas sphere, and that at the moment they have made a valuable contribution to the development of this sphere in their country as professional cadres.

Giving information about the Ministry of Science and Technology of Cuba, Alfredo Nieves Portuondo said that, during his diplomatic career he is ready to provide the necessary assistance to create scientific links between this institution and ANAS.

The sides discussed the possibilities of cooperation in various fields of science and came to a decision on signing a Memorandum of Understanding between the scientific institutions of the two countries.

In conclusion, a commemorative photograph was taken.