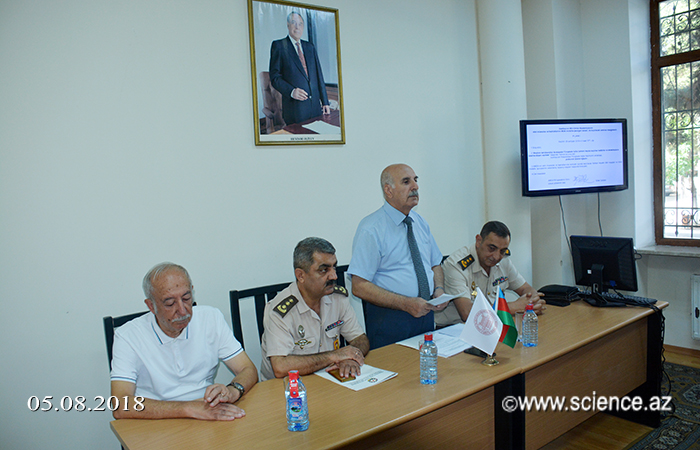 II Special Division held a training workshop on measures taken during emergencies at Presidium of ANAS.

Opening the event in which the Chiefs of Civil Defense (GO) of the scientific institutions and organizations of ANAS took part, the head of the department Eldar Guliyev informed on the issues on the agenda.

He said that, the heads of civil defense headquarters of scientific institutions and organizations of ANAS are constantly informed about the rules of conduct during emergencies that may occur. He also noted that the ability to use individual and collective means of protection, the study of basic methods and means of protection from emergencies, adherence to the rules of behavior determined in extreme situations, and the study of rules for the provision of primary health care are the main tasks of citizens.

E.Guliyev touched upon the importance of replacing old personal protective equipment in academic institutions with new ones and stated that in this connection an appeal was sent to the leadership of the Academy.

Further, employee of the Ministry of Emergency Situations, Colonel Gudrat Agayev delivered a paper on "Actions taken in emergency situations in connection with public safety and staff tasks". He noted the increase in the number of emergency situations in the world in recent years, and said that, this is due to human intervention in nature.

G.Agaev stressed that, the protection of human resources is the main task during emergency situations, and several legislative acts have been adopted in this country, he also noted that the Ministry of Emergency Situations and the GO Army are equipped with the most up-to-date equipment and professional staff. He said that certain documents have been signed in this direction with the member countries and supporters of the European Union, NATO and the CIS, and that the best practices of these countries have been studied.

Gudrat Agayev spoke about the work done by the Emergency Ministry in urgent order to eliminate the consequences of floods, mudflows and heavy consequences of earthquakes.

The official representative of the Ministry of Emergency Measures highly appreciated the measures taken in the field of civil defense in ANAS, and stressed that mutual cooperation will continue.

After the report was completed, answers were given to questions on this topic.

Later, Deputy Chief of the Main Directorate of Civil Defense Affairs of the Ministry of Emergencies, Colonel Javanshir Hashimov said that, in general in the republic for 2018, the Action Plan approved 159 ministries, committees and organizations. He said that a number of inspections were carried out in the current year, and in some organizations the awareness of the population is not properly conducted and is of a formal nature.

J.Hashimov noted that, at the moment a number of draft laws are being developed to improve the legislation on civil defense. The official representative of the Ministry of Emergency Situations also provided information on the provision of warning signals to citizens in crisis situations.

The instructions were given to the chiefs of staffs of the GO and the GO troops about future events and training for the month of September.

Further, a number of existing problems were considered.