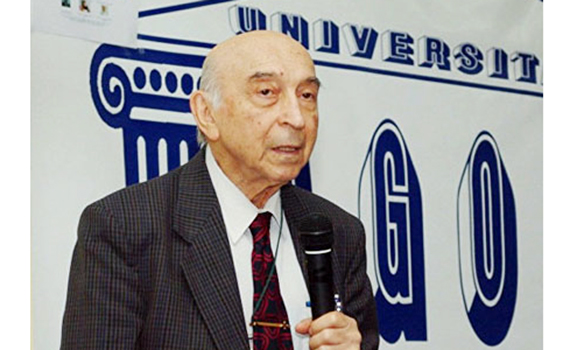 Today is the anniversary of the death of world famous Azerbaijani scientist, the founder of the theory of fuzzy logic and fuzzy sets, Professor of University of California Lutfi Zadeh

Lutfi Rahim oglu Alaskarzade was born on February 4, 1921 in Baku, received his primary education in secondary school #16. In 1932 the Alaskarzade family was forced to move to their homeland South Azerbaijan. Having completed secondary education here, Lutfi Zadeh enrolled in the Faculty of Electrical Engineering of Tehran University.

After the successful completion of the university, he moved to the United States of America to continue his education at the Massachusetts Institute of Technology. The foundation of his world-known 6 important theories was laid here.

From 1944 to 1959 L.Zadeh received a Master's and Doctor's degree in the Massachusetts Institute of Technology and Columbia University. In 1959 he became a Professor at the University of Berkeley and since 1963 he headed the Department of Electrical Engineering and Computer Science. In this university L.Zadeh worked as professor and director of the Institute of Soft Computing.

World fame and glory to the Azerbaijani scientist was brought by the theory of fuzzy logic (Fuzzy Logic), which is considered revolutionary and is widely used all over the world. This theory gave new meaning to the concept of double sets - fuzzy sets and allowed many large companies to succeed in their technological developments. The scientist is also the author of such studies as "Theory of impressions", "System theory", "Theory of Optimal Filters", which played a large role in the development of science, its formation on new foundations.

Books "The Coryphaeus of Modern Science", "The World Cannot Exist without Geniuses" was devoted to the famous scientist, "Far and near Lutfi Zadeh" documentary has been shot and created the association "Zadeh's Legacy and artificial intelligence" and the International Academy of modern science Lutfi Zadeh.

His famous theory of the space of states and the theory of control and observation of dynamic systems forms the basis of modern management science. The US National Space Research Center (NASA) investigates, designs and applies control systems based on these theories.

The last time the world-famous scientist arrived in Baku in November 2008 to participate in the international exhibition and conference of telecommunications and information technologies "BakuTel". L.Zadeh also took part in the event organized in the Presidium of ANAS, in which he was awarded the Honorary Diploma of ANAS for merits in science.

Let us note that in 1989, for successes in the theory of fuzzy logic in industry, L.Zadeh was awarded the highest Japanese award "Honda", which is awarded to Japanese scientists.

Lutfi Zadeh is the only person elected as a lifelong professor at the University of Berkeley.

He was a leading NASA and NATO specialist. He also headed the Institute of Information Technology "İnstitute Zadeh-ZİFT" in the city of Berkeley, in which he lived. For information, we will inform you that Lutfi Zadeh was the second scientist in the world after the German scientist Max Planck, whose name and the name of the theory, during his lifetime, had a scientific center.

L.Zadeh was a member of many foreign academies. He was awarded awards and medals of numerous honorary societies and foundations. He was an honorary doctor of public organizations and foreign countries. The world famous scientist was also elected a member and honorary academician of the National Engineering Academy of the United States, the Russian Academy of Natural Sciences.

It should be noted that the scientist's body, according to his will, was brought to Azerbaijan, and he was buried in the First Alley of Honorary Burial. On the eve of the anniversary of the death of an outstanding scientist, a tombstone was erected on his grave, prepared by the national artist, academician Omar Eldarov.