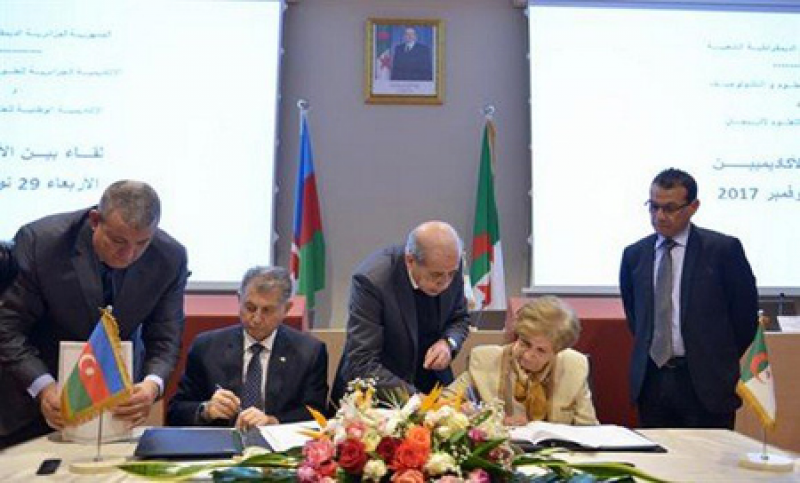 ANAS delegation, headed by President, Academician Akif Alizadeh visited to the Algerian People's Democratic Republic. ANAS Academician-Secretary, Academician Rasim Aliguliyev and head of the Department "Seismology and seismic hazard" of the Institute of Geology and Geophysics, Director of the Ukrainian Scientific and Technological Center in Azerbaijan, Doctor of sciences for the Earth sciences Gulam Babayev are members of the delegation.

In the framework of the visit, Prime Minister of the Government of the Republic of Algeria Ahmed Uyakhya received President of ANAS, Academician Akif Alizadeh in his residence. The meeting was attended by the President of the Algerian Academy of Science and Technology, Mrs. Malika Allab-Yaker, Minister of Higher Education and Scientific Research Tahar Hajar, Rector Said Mohammed and Professors of the University of Science and Technology. During the meeting, Academician Akif Alizadeh informed the Prime Minister about the policy of the Azerbaijani state in the field of science, education and high technologies, spoke about the history of the formation and activities of the academy, the history of cooperation of Azerbaijani geologists and oil workers in the production and exploration of oil and gas fields in Algeria during the Soviet era Union. The sides held an extensive exchange of views, discussed opportunities and prospects for bilateral relations, as well as cooperation within the framework of the programs of the European Union, Erasmus, Horizon-2020 and other international mega-projects.

By mutual agreement, a number of priority scientific directions in the field of exploration of oil and gas fields, seismology, research of ancient manuscripts, history, archeology, physics, chemistry, information technology, mathematics and a number of other fields of science were identified in the framework of cooperation. The Algerian colleagues noted the interest in cooperation and expressed satisfaction with the deepening of cooperation between the two countries in the field of science and technology.

At the meeting with the rector Professor Said Mohammed and with Professors at the University of Science and Technology Academician Akif Alizadeh reported on the establishment of a master's degree in education at ANAS, he told about the steps being taken to strengthen the integration of science and education. The academician noted the possibility of exchanging young undergraduates and doctoral students of ANAS and the University of Science and Technology. Academic delegation also visited the Center for High Technology Development and the Paraiseismic Research Laboratory of Algeria.

Within the framework of the visit, the ceremony of signing a memorandum of cooperation between the National Academy of Sciences of Azerbaijan and the Algerian Academy of Science and Technology was held, which envisages the expansion of scientific ties and improvement of scientific cooperation between the two countries. On the eve of signing the Memorandum, a meeting was held with representatives of scientific organizations, universities, governmental organizations of Algeria. Academician Akif Alizadeh informed the participants of the ceremony about the reforms, activities of scientific organizations and priorities of the Academy, the role of the state in the development of science in the country, answered numerous questions from the audience, and also gave interviews to the national television and radio broadcasting companies of Algeria.

The meetings were attended by the Extraordinary and Plenipotentiary Ambassador of Azerbaijan to Algeria, Mahir Aliyev, who made every effort to successfully conduct the visit and organize meetings.