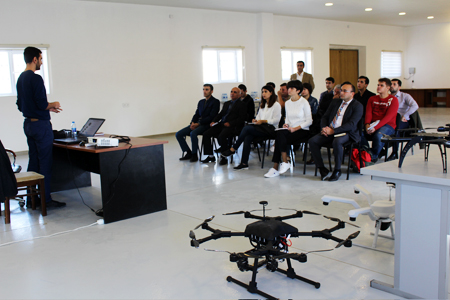 The Science and Technology Park (ETP), a resident of the ANAS High Technologies Park, has improved the production of new-generation, non-pilot-flying devices meeting international standards. The first models and flight equipment are already ready. Note that, the company engaged in production of drones, has 5 types of aircraft.

Training courses have been launched at ANAS High Technology Park for the management of Multirotor type unmanned aerial vehicles and various tasks and functions.

Director of Technopark, PhD in Agrarian Sciences Vugar Babayev said that first of all the employees of the institutes of ANAS participated in the trainings aimed at creation of conditions for the application of drones produced by HTP in industry, service areas. The drones produced by the HTP will be used by the academy's institutes to carry out scientific research. After the exercises, the participants will master the ability to control the unmanned aerial vehicles.

During the training conducted by the experts of Science and Technology Park, participants were given detailed information about drones. It was noted that the drones will be able to perform video-photography from high altitude, spectral analysis of agricultural land, plotting, mapping (3D mapping), transport (scientific research equipment for analysis), observation (remote observation of animals) can be used for purposes. The trainings of the employees of the Institute of Geography, Soil Science and Agrochemistry, Oil and Gas, Zoology, Geology and Geophysics and Botany will continue. In the future, it is planned to develop multifunctional drones by upgrading the aircraft.

Starting from 2016, the Science and Technology Park of ANAS is engaged in the production of electronics, automation, software, defense and civilian apparatus, drones and other electronic devices.