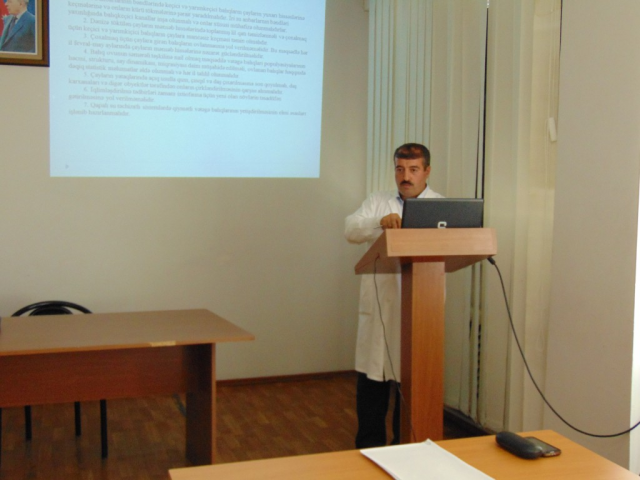 Discussion of doctoral dissertation of the leading scientific worker of Hydrobiology Laboratory, Ph.D.Namig Mustafayev on "Morpho-biological and ecological characteristics of fish in Azerbaijan's domestic reservoirs, ways of regulating stock of fishery fish" was held at the scientific workshop acting attached to the Defense Council of the Institute of Zoology of ANAS.

Since 2009, the researcher has collected about 17,000 sample species of 62 species and 71 species of water from all regions of Azerbaijan, and has studied them on the basis of commonly accepted biological methods.

As a result of the research, it was found out that currently there are 11 species of flora and fauna of 15 species, 44 species of round mussels and 67 species and half types of fish in Azerbaijan's inland water basins. The changes that took place in the morphological and biological signs of all the fish that were acquired were revealed, and their modern areas were clarified.

The reasonable taxonomic inspections have been carried out on fishes spread in the domestic water basins of Azerbaijan, which are adapted to the modern systematics.

Two species of fish (Amur ellibashi and Korean clergy) were firstly mentioned for the fauna of Azerbaijan, their distribution, morphological, biological and ecological features were studied in details. It has been discovered that both species do not differ from the typical species of the Amur River basin for morphological signs. These species have also a negative impact on fish resources by feeding their caviar (Amur april) along with food competition with representatives of local fauna.

The study of the distribution of cystic and fishes in Azerbaijan's inland water basin shows that 16 of the species and subspecies of the ixtiofauna are found in all regions of Azerbaijan, 37 in several regions, and the remaining 15 only in one region.

The dynamics of cytochrome P-450 and SMAZ were observed in the brain, liver and skull tissues of the fish, the role of serotoninergic system in their adaptation to the effects of their adverse ambient conditions was found to be comparatively studied and found that fish belonging to different ecological groups and to the different types of tissues differ from the effects of adverse environmental factors, and they use adaptive potential of varying degrees against these effects.

The materials provided by the researcher and the analysis of the official statistical data provided by the Ministry of Ecology and Natural Resources have identified the causes of the decline of significant species and developed practical proposals for the restoration of their resources.