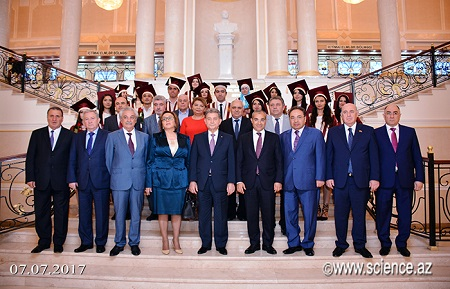 On July 7, the first masters of the National Academy of Sciences of Azerbaijan graduated. Ismail Sadigov, head of the humanitarian affairs department of the Cabinet of Ministers of the Republic of Azerbaijan, Mikail Jabbarov, Minister of Education of the Republic of Azerbaijan, Maleyka Abbaszade, the chairman of the Board of Directors of State Examination Center, the heads of scientific and educational institutions of the republic, full members and corresponding members of ANAS attended the event.

Opening the event President of ANAS, academician Akif Alizadeh noted that the graduation of masters of ANAS was a significant event in the history of the Academy. ANAS master's program was established in 2015 by the support of the President of the Republic of Azerbaijan Ilham Aliyev, academician noted and expressed his gratitude to the head of state, as well as to the Minister of Education of the country and to the chairman of the Board of Directors of the State Examination Center for their support.

About 400 bachelors applied to the Academy in the first year of admission to the Academy and 19 students in 9 specialties entered to the Master's program and received the highest scores; One of the masters was called up for military service, and 18 people successfully continued their studies and got the title of masters. 15 people completed their studies with honors diplomas, academician stressed.

Academician Akif Alizadeh said that because of great interest for academy’s Magistracy, in the following years the number of specialties and planned places would be increased: "In 2016/2017 academic year, 56 people admitted to the magistracy in 18 specialties. And this year more than 1700 bachelors applied to the Academy, according to the latest data, 67 got the student name. We are very pleased that from year to year the interest of young people towards science and the Academy is growing. Young people try to experience, find themselves in science. And we, in turn, are trying to create better conditions for building training in the Master's program of the Academy and preparing master's students at a professional level".

The main condition for the preparation of scientists is the quality of education. Students passing the practice at the laboratories of the Academy equipped with modern instruments and equipment, also take part in international practices abroad. Masters working in various scientific fields, held practical training at the Joint Institute for Nuclear Research, in Dubna (Russia), scientific centers in Italy, at the University of Hajettepe (Turkey), participated in the 18th winter school for molecular biology and biophysics in St. Petersburg, which was organized by St. Petersburg Institute of Nuclear Physics and the "Kurchatov Institute Research Center. At the same time, prominent scientists of the world read their lectures to undergraduates, underlined president of the academy.

Important measures have been implemented to strengthen the social protection of master’s students and "Master-2017" competition had been taken place to support their scientific achievements and increase their creative potential, to stimulate talented students who showed high results A.Alizade emphasized.

Stressing the importance of the Academy's cooperation with the Ministry of Education, the head of ANAS reported that more than 500 students had been practicing in the scientific institutions of ANAS, 200 of which were students of the "SABAH" groups created in universities. In the future ANAS will continue its activity in the field of integration of science and education and support all initiatives in this field, academician Akif Alizade noted.

Expressing his confidence for graduates in all spheres of their activity, academician Akif Alizadeh congratulated them on the Day of the graduate and wished them further success.

The establishment of the Master's degree in the Academy, where the main scientific potential of the country is concentrated, is an important step aimed at socio-economic and cultural development of the country and the formation of a knowledge society, minister of Education Mikail Jabbarov underlined and emphasized appeal of the head of state: "We must turn black gold into human capital”. Then minister expressed his gratitude to scientists, congratulated the graduates and wished them more success.

Vice-president of ANAS, academician Dilgam Tagiyev noted that the achievements of the graduates who graduated from the Master's program of ANAS, their high level of knowledge demonstration during the defense of dissertations on modern and promising topics is the proof of organization of the support of the head of state Ilham Aliyev's master's program in ANAS is a successful step. Academician noted that the involvement of scientists of ANAS in the process of training, and specifically - in the system of magistracy, is an important factor in the integration of science and education, which will play a positive role in enhancing the country's intellectual potential.

Then the director of the Institute of Molecular Biology and Biotechnology, academician Irada Huseynova spoke. In recent years, many reforms have been carried out at ANAS, important measures are being taken to integrate science and education, which contributes to the development of Azerbaijani science. The organization of the master's degree helps to attract young people to scientific work, she noted.

The scientist reported that the first specialty for master's program at the Department of Biological and Medical Sciences was molecular biology. The graduates of the scientific institution are four people. Within two years all conditions were created for them, foreign language courses organized, they were also taught by scientists invited from abroad. Students took part in various republican and international conferences; scientific articles published on the basis of the results of their research work in journals with the impact factor, academician stressed.

Noting that the creation of the Master's degree in the Academy is of great importance for the future development of science in Azerbaijan, Irada Huseynova congratulated the graduates and wished them further success.

In their speech, graduate of the Institute of Catalysis and Inorganic Chemistry Nigar Ibragimova and graduate of the Institute of Linguistics Ainur Imanova noted that their proud to be the first graduates of ANAS and they stressed that they would try to justify the hopes. Expressing the great gratitude to the leadership of the Academy for all the conditions created for them, the graduates noted that they would continue to do everything in their power to successfully continue their scientific activity.

At the end of the event, graduates of ANAS received diplomas.