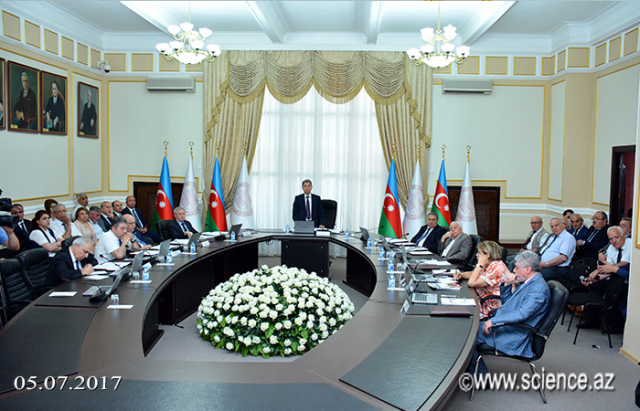 Presidium of ANAS held a meeting

On July 5, the next meeting of the Presidium of the Azerbaijan National Academy of Sciences was held.

Academician Akif Alizadeh, President of ANAS, presented the Honorary Decree of ANAS to academician Zemfira Safarova on the occasion her 80th anniversary.

The decision on partial amendments to the charter of the Central Scientific Library of ANAS has also adopted at the meeting.

To celebrate the academician Murtuza Nagiyev’s 110th anniversary, to confirm the composition of the Bureau of Physical-Mathematical and Technical Sciences of ANAS, including the approval of the new composition of the Scientific Council of the Institute of Science History of ANAS, partial changes in the structure of the Institute of Caucasian Studies of ANAS and establishing Department of International Relations at ANAS Institute of Zoology included to the agenda.

The decision was also made for PhD on biology Saida Sharifova’s official journey to the US University of California and PhD in Biology Ruhangiz Mammadova’s to Florida University, United States.

Head of the laboratory of photochemistry of chloroplasts of the Institute of Molecular Biology and Biotechnology of ANAS, correspondent member of ANAS Ibrahim Azizov, director of ANAS Institute of Soil Science and Agrochemistry, correspondent member of ANAS Alovsat Guliyev and outstanding composer, People's Artist, Honored Art Worker, Chairman of Azerbaijan Composers Union, Corresponding Member of ANAS Firangiz Ali Zadeh on the occasion of her 70th jubilee have been awarded with the Honorary Decree of ANAS.