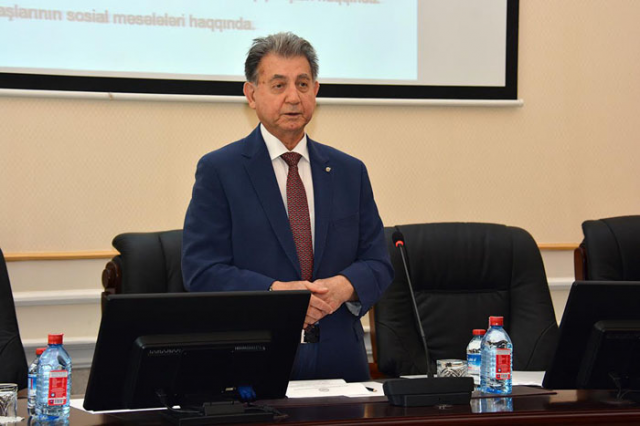 Board of Directors of scientific institutions of ANAS held a meeting

Greeted the participants of the meeting, ANAS President, Academician Akif Alizadeh congratulated everyone on the Day of National Salvation - June 15. Noting that, this historic day is not only a holiday on the calendar, but also has great social and political significance, the academician honored the memory of the national leader Heydar Aliyev.

Then Academician Akif Alizadeh informed the audience about the issues on the agenda. At first, the issue of the first issue of the master's program of ANAS and the next admission to the magistracy was considered. Academician Akif Alizadeh spoke about the successes achieved at the ANAS in the field of education in a short period of time: "The high rating and great authority of the Master's program of the Academy is the success of our scientists, for which I express my gratitude to everyone. At present, very many entrants have submitted their documents to the master's program of ANAS, which testifies to the relevant conditions created in the Academy and the successful implementation of the process of study in the magistracy".

In his speech on this issue, the head of the Office of Science and Education of the ANAS Presidium, correspondent member of ANAS Aminaga Sadigov told about the admission to the Academy's magistracy for the next academic year, the great interest of young people to science and to ANAS. He said that 1742 people submitted applications for 87 planned places to the master's program of ANAS, that is, on average more than 20 people claim for one place and for some specialties this figure is about 50 places.

Noting also that, the first graduate program of ANAS will be held on July 7, Aminaga Sadigov added that, this year the graduates of the Master's program of ANAS in various specialties were 18 people who at a high level defended their master's theses. Calling this a significant event in the history of the Academy, the head of the department said that the ceremony of awarding graduates with their master's diplomas will be very solemn.

Speaking about the events that will be implemented during admission to the master's program and under the preparation of undergraduates, academician-secretary of ANAS, Academician Rasim Alguliyev put forward some proposals in this regard, stressed that the ANAS possesses great potential for the preparation of highly specialized personnel for our country and the emergence of a new generation Scientists.

At the meeting, the president of ANAS, Academician Akif Alizadeh spoke about the state of studying English in scientific institutions of ANAS, publishing bibliographic indicators of scientists at the level of modern requirements, voiced a number of proposals.

Then, speaking about the Academy's cooperation with the Ministry of Emergency Situations, President of ANAS noted that, close ties have been established between the ministry and the institutions of ANAS. Speaking on this issue, the director of the Institute of Petrochemical Processes after Academician Yusif Mammadaliyev, Academician Vagif Abbasov, Director of the Institute of Genetic Resources, corresponding member of ANAS Zeynal Akperov and Director of the Institute of Soil Science and Agrochemistry, correspondent member of ANAS Alovsat Guliyev said that, in cooperation with the Ministry of Emergency Situations Specific measures were implemented to implement new projects.

At the meeting of the Board of Directors, the head of the Department of Affairs of ANAS, Doctor of Political Sciences Fatali Abdullayev, spoke about improving the social status of the Academy staff. He informed that the commission on the distribution of apartments created by the corresponding resolution of the Presidium of ANAS had already begun its work: "According to the agreement concluded between the Academy and Evrostroy-S LLC on November 14, 2012, the distribution of apartments was started for the purpose of resettlement of doctors of sciences, Doctors of Philosophy and those who do not have the scientific degree of ANAS workers who live in a hostel at the address "Baku City, Yasamal District, Sharifzade Street 12", into the apartments allocated for the Academy in the new buildings erected on the territory of this hostel. At the next stage, housing problems of researchers who are registered in the hostel will be considered, but they do not live there for a good reason".

Head of the Department of ANAS Affairs Fatali Abdullayev recalled that, the allocation of apartments to the staff of ANAS and members of their families was carried out by drawing lots, the degree and family situation of the employees were taken into account in the distribution. Fatali Abdullayev noted that, corresponding measures will be implemented in order to improve the social status of scientific staff of ANAS.