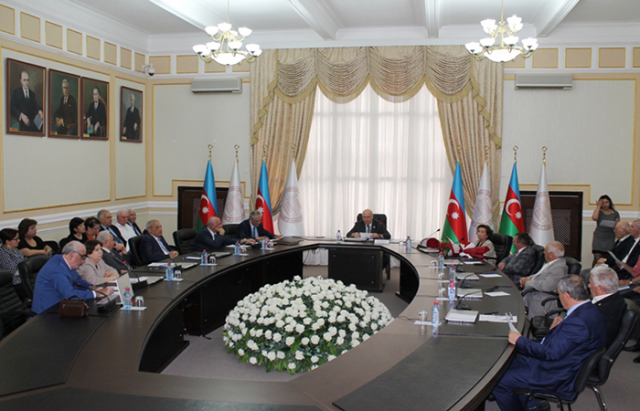 4 nominees from DBMS attends the election “Professor of ANAS”

Division of Biological and Medical Sciences has held the next general meeting at the Presidium on June 12, where were attended active and corresponding members of ANAS from the department, and institute directors.

Opening the meeting, Academic-Secretary of the division, Academic Ahliman Amiraslanov brought to mind the issues of agenda.

Chief of Organic Fertilizers department of the Institute of Soil Elm and Agro chemistry, Dr. Agrarian sciences Pasha Zamanov has been awarded the Certificate of Merit of DBMS for his merits in science and 90th jubilee.

Several staff issues were scheduled at the meeting, including it was decided to solicit for Presidium of ANAS for creating International Relations Department at the Institute of Zoology.

Then, names of nominees submitted for “Professor of ANAS” were noted. After being familiar with the documents of nominees, their scientific and pedagogical activities were discussed.

Academic A. Amiraslanov stated that, 4 nominees from DBMS attends the election “Professor of ANAS” and close participation of scientists to be deserved to this name will be provided in the processes happening in ANAS. Then, bureau members sounded their opinions about the mentioned nominees.

In closing, election was held by a secret ballot and names of nominees were included in the list to be submitted to the Presidium of ANAS.