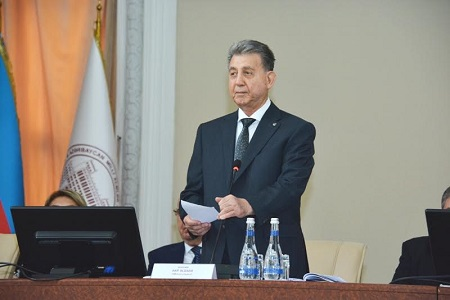 Extended meeting of the Presidium of ANAS took place

On May 24, an extended meeting of the Presidium of the Azerbaijan National Academy of Sciences took place.

Then the question of holding the 100th anniversary of the prominent scientist and military figure, honorary member of ANAS Karim Karimov was considered. Recalling the Order of the Head of State Ilham Aliyev on the 100th anniversary of the scientist, Academician Akif Alizadeh noted that ANAS, together with the National Aerospace Agency of the Ministry of Defense Industry of the Republic of Azerbaijan, prepared an Action Plan in connection with this event.

The Presidium discussed issues related to implementation of the Order, the Action Plan was approved.

At the meeting, decisions were passed to reward corresponding member of ANAS Aghasi Melikov with the Certificate of Honor of ANAS on the occasion of his 60th jubilee and the scientific session dedicated to the 80th anniversary of the prominent art critic, active member of ANAS, Doctor of Art History, Professor Zemfira Safarova, and her works for printing, etc.