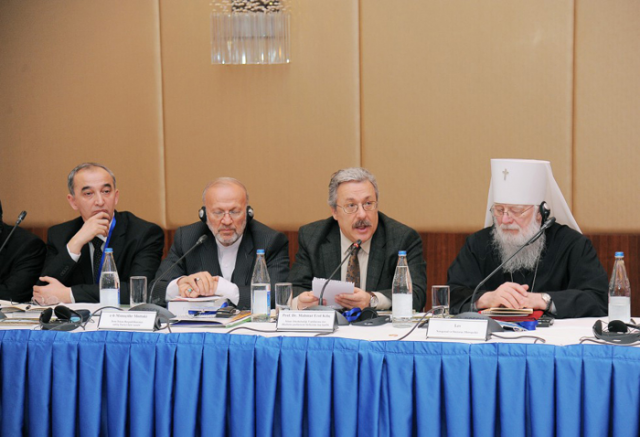 “Islamic Solidarity – the challenge of time” international conference kicks off

On March 15, "Islamic solidarity – the challenge of time” international conference co-organized by the Caucasian Muslims Office (CMO), the State Committee for Work with Religious Organizations, Azerbaijan National Academy of Sciences and Center for Multiculturalism took place.

Event bringing together about 30 foreign guests from 15 countries, a number of ambassadors of Muslim countries, religion, science and politics figures, has began with national anthem of Azerbaijan, and recitation of verses from the Quran.

Then a video was featured on religious tolerance in Azerbaijan.

Opening the conference chairman of CMO Sheikulislam Haji Allahshukur Pashazadeh stated that, there is stability in Azerbaijan, which was multinational and very conceptual state historically: "Known as one of the rare models of secular state in the Islamic world, Azerbaijan is able to go ahead in the creation unity among Muslim countries and in the process of Islamic solidarity. Today world indignation of religious and ethnic extremism, xenophobia, Islamophobia and the manifestations of radicalism is a serious blow to interfaith and interethnic dialogue among civilizations. We can get rid of the threats only by joining efforts, and cooperation among religions."

Then, President Ilham Aliyev's congratulatory letter was read to the participants of the conference by the State Advisor for Multinational, Multicultural and Religious Affairs, Academician Kamal Abdullayev: "Since ancient times people of different religions had lived in Azerbaijan. Today, Azerbaijan also continues the tradition of religious tolerance. Azerbaijan has hosted many international events in this field. As its continuation, this year will be held the Islamic Solidarity Games. Islamic solidarity in this regard is very important and should be taken seriously. I hope that this conference will contribute to the Islamic world."