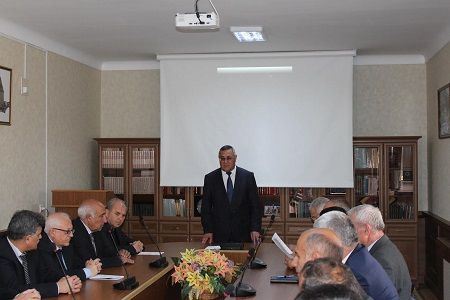 Conference has begun with a minute of silence for memory of genocide victims.

Chairman of Branch Academician Ismayil Hajiyev informed about the massacres committed against civil population of Baku, Shamakhy, Guba, Garabakh, Nakhchivan, Zangazur and in other regions in March 1918. March massacres were one of the stages of a planned genocide policy by Armenians against Azerbaijanis. Notifying about ruining of thousands historical-cultural monument and settlements belonging to our nation, academician noted that, numerous materials concerning genocide committed against Azerbaijanis by Armenians are available in the archives of several states.

At the event was noted that, in the books of Mir Mohsen Nevvab "Armenian-Moslem argue in years of 1905-1906" and Mammad Said Ordubadi’s “Bloody years” compiles vital historical documents.

In closing, slide composed of photos and documents reflecting real facts on 31 March and Khojaly genocides, was displayed.