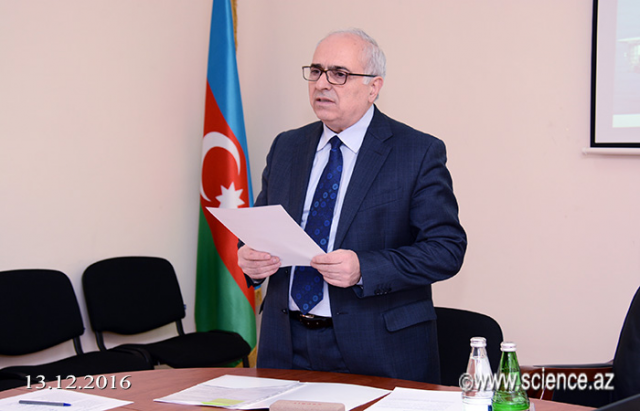 Today, ANAS Institute of Geography held the next assembly of the Division of Earth Sciences (DES).

Assembly with participation of division members, directors of the Institute of Geology and Geophysics, Institute of Geography, Republican Seismological Survey Center, as well as deputy directors of science and scientific secretaries was opened by Academician-Secretary of DES Academician Fakhraddin Gadirov, who informed on the issues of agenda.

Then head of the Laboratory of drilling and cement fluids of the Research Institute and Oil and Gas Design of State Oil Company of the Azerbaijan Republic, Ph.D. Elchin Kazimov delivered a paper on "Green technology based on the effect of low power and alarm in drilling".

It was noted that, as a result of penetration of modern drilling at great depths of the Earth subsurface to reduce the risk of accidents and complications are characterized by complex geological conditions of thermobaric sections based on the theory of " Effect of the impact of small and anxiety" implemented a new scientific and practical development.

Noted usage of economic, environmentally friendly nanomeasuring components, the speaker brought to attention that for the greasing additives, the stabilizing reagents, aggravating materials and strengthening of wells nanocement structures are developed.

According to him, due to nanoinfluence resistance of a portlandtsementny stone to hostile environment is established, the mechanism of management of its passability is developed. These systems without accidents and complications have been applied in well-drilling and strengthening of a bottomhole zone.

E.Kazimov stressed that, development are in force in accordance with the patent documents of the Republic of Azerbaijan and the Russian Federation.

Then, President of ANAS, Academician Akif Alizadeh spoke in connection with the state of the journal "ANAS Bulk of news ". Noting that, the increase in quality indicators published in the journal articles is one of the important issues, ANAS President urged all researchers to be careful in carrying out research activities.

He noted that, researchers need to conduct studies on priority research areas, refer to the dynamic and relevant topics and avoid repetition.

ANAS President also urged the scientists and experts to share their experience with the young staff, provide them with the necessary assistance in the writing of scientific articles.He said that, we should act jointly with the students at the academy graduate and properly guide them. This is one of the most important tasks facing every scientist.