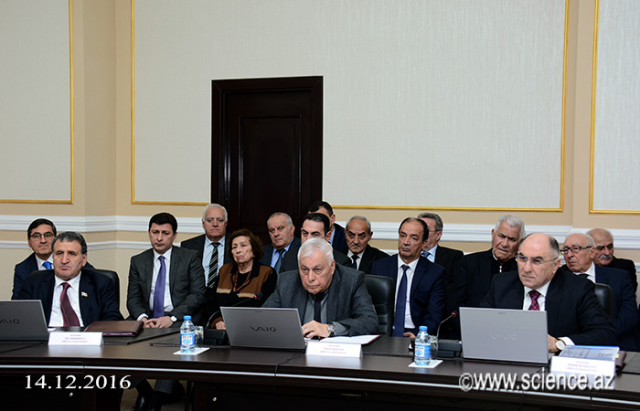 Enhances the activity of scientific computer of AzScienceNet network

In his speech on the issue, Academician-Secretary of ANAS, Academician Rasim Alguliyev noted that, in many government documents are reflected such important tasks as strengthening the information support of science, the usage of ICT in science and the formation of e-science.

Having said that, in accordance with these tasks the AzScienceNet establishes close ties with the authoritative international organizations of the world, Academician stressed that, the network creates the conditions for scientists and specialists of ANAS able to use opportunities offered by scientific and educational networks in the world.

In their research, scientists share the volumetric sensors, carried out large-scale research projects, the use of advanced network technologies and services.

Saying that, the scientific computer network of ANAS the AzScienceNet provides Internet services scientific institutions and organizations of the Academy at the highest level, enables the integration of domestic science in the world serves as a national operator for scientific and educational networks, Academician Rasim Alguliyev added that, are continued works on the expansion of the above-mentioned network infrastructure.

The scientist also spoke about other projects in which our country represents by AzScienceNet.

Academician Rasim Alguliyev stressed that, for tasks such as the development of national science to the application of information and communication technology its integration into the world science creation of a unified national scientific infrastructure and online information space, etc., it is necessary to further strengthen the activities of CNO AzScienceNet.

Considering all the above, Presidium took the decision in which reflected issues such as the preparation of the Institute of Information Technology of ANAS the action plan to strengthen the activities of the CNO of AzScienceNet, strengthening the material-technical network base activities in the field of provision of electronic mail, conduct online monitoring and web analytics, etc. Also, according to the decree, through CNO AzScienceNet scientific and educational institutions, which are located in the regions of Azerbaijan will be provided distance education services, to accelerate the integration of domestic science in the world within the framework of the project "EaPConnect" expand cooperation CNO AzScienceNet with relevant international organizations, etc.