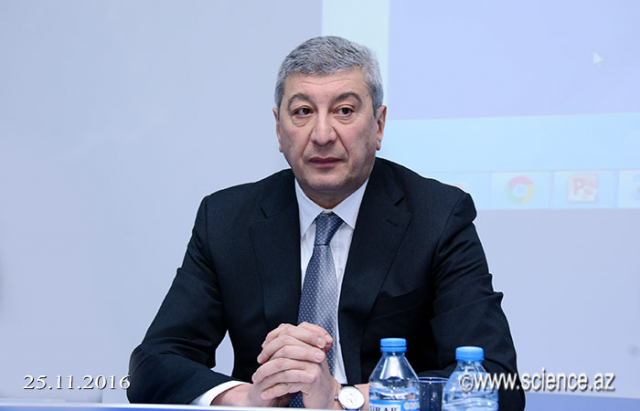 In modern times, the key factor, defining statehood of each country is a national language. Regulation, systematization and development of national terminology is of great importance in progress of social function of the state language.

After having status of state language, Azerbaijani language which had a long history, has gained even more social value, and ensuring the protection and efficiency of it became one of the priorities of modern state-building in the country. Establishment of Terminology Commission under the Cabinet of Ministers by the order of Mr. President of the Republic of Azerbaijan dated May 23, 2012, has increased the responsibility for terminology.

In recent years, significant changes and development in various fields of science and technology led to the enrichment of the individual subject areas of language, and terminology databases. Growth and spread of world’s science and education centers engaged with terminology, development dynamics of various fields of science and technology and other factors made necessary to create information system, ensuring structuring of terms in a single center, their collection, processing and usage.

President Ilham Aliyev's decree dated April 9, 2013 on “Using Azerbaijani language in accordance with the requirements of globalization and development of linguistics in the country" State Program has set important tasks forth relevant agencies. Related to the items concerning learning and the promotion of information and communication technologies, purposeful work was conducted at the Institute of Information Technology (ANAS ICT) as well as at other organizations. Institute's scientists and experts have developed the Concept of the National Terminology Information System (NTIS) and the web-portal.

On November 25, Institute of Information Technology hosted for the presentation of Concept of the National Terminology Information System (NTIS) and the web-portal. The event brought together chiefs of relevant governmental bodies, scientists and specialists of ANAS institutes, including delegates of mass media.

Opening the event President of ANAS Academician Akif Alizadeh highlighted the language as one of the vital attributes of the state, embracing people and the country's identity, culture and psychological characteristics.

Academician brought to mind that, state policy on the language preservation and development, which implemented in the country, was laid by national leader Heydar Aliyev. Thanks to will and far-sighted policy of the great leader, language was given the status of state language, government agencies and other enterprises, institutions and organizations launch the implementation of the Azerbaijani language. New stage of development of this policy is successfully continued by President Ilham Aliyev of Azerbaijan, which provided him with a special focus on diverse factors, he said.

A.Alizadeh underlined the establishment of the National Terminology Information System of international requirements and standards, is a result of long-term strenuous intellectual labor of State Committee for Standardization, Metrology and Patent and activities of scientists and experts of the Institute of Information Technology.

"Operating at a high level, National Terminology Information System will improve regularly and prosper”, - said the academician and expressed hope to service of the system for Azerbaijani people and state over many years.

The chairman of State Committee for Standardization, Metrology and Patent Ramiz Hasanov reported at the event and noted that, joint action related to provision of science, economy and industry with science in Azerbaijan, protection of rights on real economic benefits aimed at the scientific results and strengthen the scientific-technical sides of standardization is of great importance.

According to R.Hasanov, standardization of terminology increases the quality of normative-technical documentation, educational and information documents and facilitates understanding between experts in different areas of knowledge and work of the interpreters.

Notifying the significance of terminology system, which has been developed by State Committee for Standardization, Metrology and Patent with ANAS, the supreme scientific body of the Republic of Azerbaijan, implementing state policy in the field of science, R.Hasanov stated its contribution to formation and development of terminology base of Azerbaijani language. As a continuation of cooperation via Academy he noted the necessity of creation Technical Committee due to elaborate national standards on terminology and other scientific fields.

Then, next speaker, Academician-Secretary of ANAS Director of Institute of Information Technology, Academician Rasim Alguliyev, noting the exceptional historical merits of national leader Heydar Aliyev in giving the Azerbaijani language official status brought to the attention that the Great Leader has always attached great importance to the development and preservation of our native language.

He noted that, in his speech dedicated to the 70th anniversary event of ANAS President Ilham Aliyev paid special attention to issues concerning the preservation of the purity and the development of our native language.

Noting that, as a result of the introduction of ICTs in terminological activities as part of the language of computer generated scientific direction - terminological science, Academician said that, research in this area in the country began in 2008 the Institute of of Information Technology was put forward a number of conceptual approaches and methods.

According R.Alguliyev as a result of the intensive development of Internet technologies the opportunity to people's access to existing information resources in the virtual space has become unlimited, and this in turn creates great difficulties in the implementation of work on the creation of terms only by scientists and specialists. Each citizen who is interested in works on public discussion and examination of terms can take part in the solution of this problem. This activity can lead to formation of civil terminology.

Academician, affecting the conceptual basis of the National terminological information system, emphasized the possibility of providing security through the establishment of terminological Commission terminological expertise on border information exchange Azerbaijani language environment with other languages. R.Alguliyev said that e-terminology is part of the e-Science - one of the segments of the "Electronic Azerbaijan", which is in the process of formation in the country.

The scientist expressed confidence that the system in addition to providing the citizens of e-terminology services will contribute to the improvement of terminological activities in the country.

Then, researcher of the Institute of Information Technology Yusif Sadiyev, representing the national terminology web portal, spoke in detail about its structure and design. He noted that, established under the name "www.azterm.az" (www.terminologiya.az) web portal is aligned with the "Requirements for the establishment and management of information Internet resources of state bodies" approved by the Cabinet of Ministers of Azerbaijan Republic dated September 4, 2012, including with the requirements of the Special state protection service of Azerbaijan. Site Security provided at a high level.

The speaker noted that, www.azterm.az portal is an information resource with extensive search capabilities and a large information base that reflects the activities of the Terminology Commission under the Cabinet of Ministers of the Azerbaijan Republic and its research departments, as well as terminological dictionaries and other dictionaries of the Azerbaijani language.

Yu.Sadiyev brought to the attention of those present that, started in the country all terminological dictionaries, including new terms resulting from scientific and technological development on a regular basis will be included _ terminology database. He noted that one of the important features of the Web portal is the ability to establish through the section "Public tribune" ties between the Terminology Commission and citizens online.

The section can be offered new terms and topics for discussion, as well as to express their attitude to the existing terms.

Take part in discussions Academician-Secretary of the Department of Biological and Medical Sciences of ANAS, Academician Ahliman Amiraslanov, Director of the National Museum of Azerbaijani Literature of ANAS, Academician of ANAS Rafael Huseynov and Academician-Secretary of the Division of Humanitarian Sciences, Director of the Institute of Manuscripts after Muhammad Fuzuli of ANAS, Academician Teymur Karimli, noting the need for joint work of scientists and experts for the improvement of NTIS and the strengthening of the legal framework in the field of linguistics, expressed confidence that the system will play an important role in achieving the success of scientific terminology in Azerbaijan.