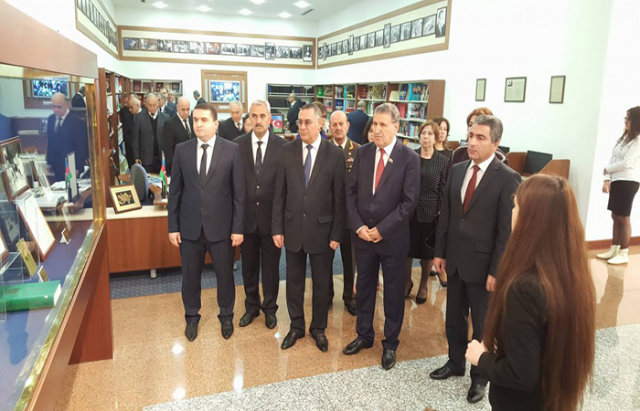 First, the guests visited the Heydar Aliyev Museum and monument to national leader Heydar Aliyev, which rose majestically on the central square of Nakhchivan.

The event, which continued in the Nakhchivan Division of ANAS, was opened by chairman of the Department, Academician Ismayil Hajiyev. Noting that the development of science in Azerbaijan is constantly the center of attention of our state, he emphasized that progress in this sphere is closely related to socio-economic and cultural development of the country. It was brought to attention that the scientific policy of the Republic of Azerbaijan, which was founded by the national leader Heydar Aliyev is successfully continued by President Ilham Aliyev.

The scientist said that the main purpose of the event, which is held in our country for the second time, is bringing to the public the achievements of today's science of Azerbaijan, the promotion of modern scientific knowledge, as well as the increased interest of young people to research projects.

He noted that the scientific policy, successfully carried out in Azerbaijan, supported by the Chairman of the Supreme Majlis of Nakhchivan Autonomous Republic at the highest level. It was reported that in recent years in the autonomous republic formed the scientific environment and the qualitative and quantitative growth, observed in science.

Speaking at the event, Vice-President of ANAS, Academician Isa Habibbeylihighly appreciated the holding of the next similar event in our country. He noted that, the issues discussed at the festival will not only serve the further development of Azerbaijani science, but also give impetus to the definition of new priorities.

Speaking about today's achievements of Azerbaijani science, Academician Isa Habibbeyli expressed confidence that the festival will play an important role in a more efficient organization of domestic scientists, integration into the international arena and to achieve success. It was brought to the attention of that, every day are growing role and position of science in our society.