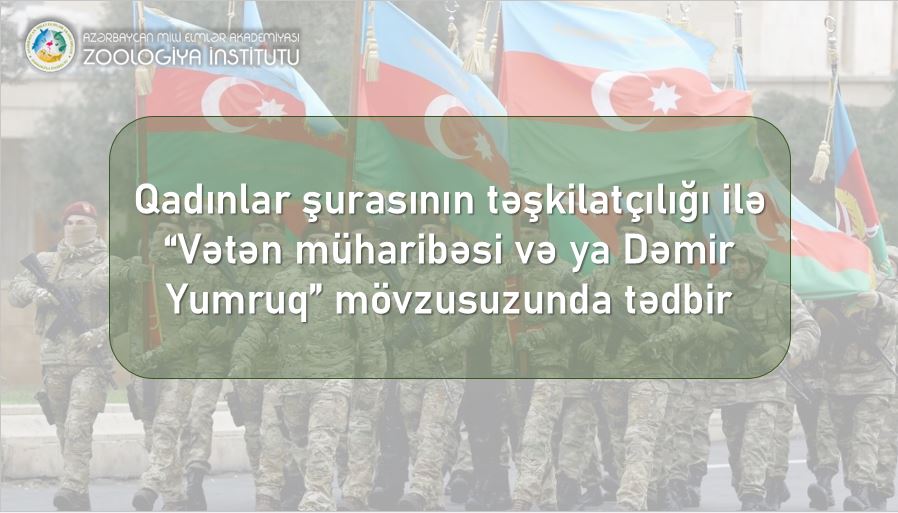 An event on "Patriotic War or Iron Fist" was organized by the Women's Council of the Institute of Zoology of ANAS on November 4. At the beginning of the event, after a minute of silence in memory of the martyrs, Acting Director, PhD in Agrarian Sciences Aladdin Eyvazov greeted the participants and expressed his heartfelt words on the occasion of "Victory Day". Then the floor was given to the chairman of the Women's Council, Doctor of Biological Sciences Yegana Mahmudova. She spoke about the heroism of our Army in the 44-day war, the brilliant victory of the Supreme Commander-in-Chief, the, the role of Azerbaijani women in the war. "The Azerbaijani army has proved to the world what our army is capable of by responding to the provocative enemy.” In her speech, D. Mukhtarova spoke about the determination of our heroic army to fight for the rights of Azerbaijan. Senior researcher of the Parasitology Laboratory, PhD in Biology Reyhan Ibrahimova delivered a lecture on "War and the unity of the rear" and spoke about the determination and heroism of our army in the war. Speaking about the role of journalists in the war, Aynur Hajiagayeva, chief laboratory assistant of the Parasitology Laboratory, emphasized the difficult but proud role of journalists sent to the war zone, how highly professional and patriotic they were. Sevinj Rajabova, a researcher at the Terrestrial Vertebrates Laboratory made speech on the topic "The Second Patriotic War" and said that 2020 will not be erased from the memory, and the dear memories of our martyred sisters and brothers will always live in our hearts. The event ended with the screening of a video on "Patriotic War or Iron Fist."