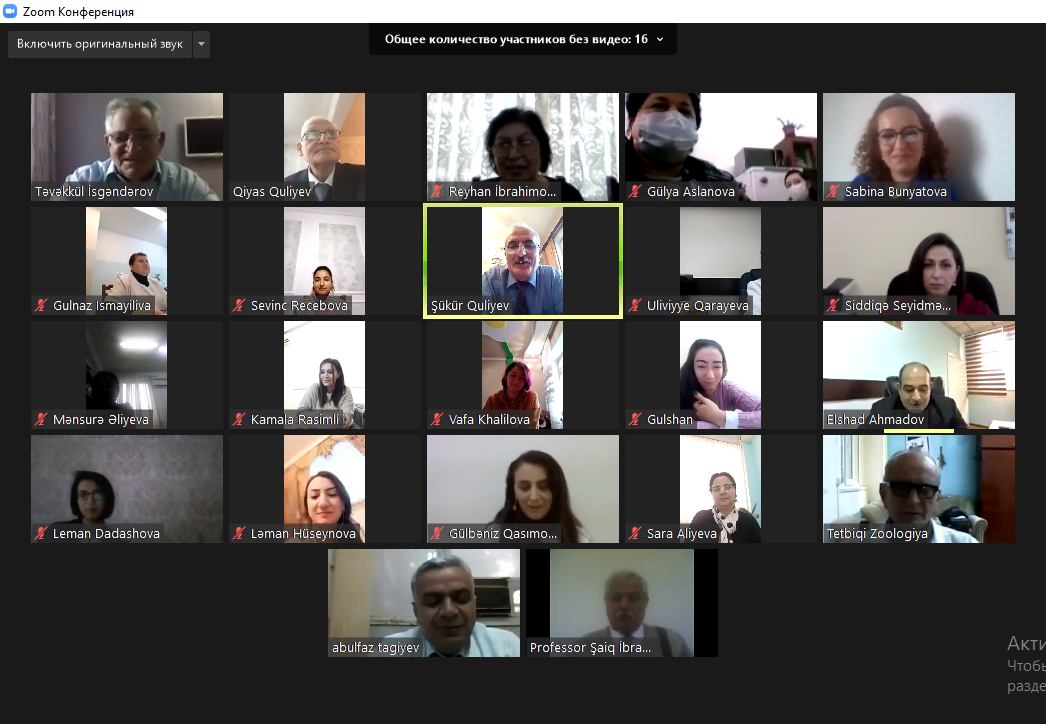 Institute of Zoology has held an event dedicated to the historical victory of the glorious Azerbaijani army. Opening the meeting held in a virtual format on the Zoom platform, acting director of the Institute of Zoology of ANAS, Doctor of Biological Sciences Elshad Ahmadov congratulated the employees on the occasion of the end of 30 years of longing with great victory. The scientist spoke about how our glorious army liberated our occupied lands from the enemy in a short period of time, and the peaceful return of other occupied lands as a result of the successful policy pursued by the President of the Republic of Azerbaijan, Supreme Commander-in-Chief Ilham Aliyev. "As a result of this policy, founded by national leader Heydar Aliyev and successfully continued by President Ilham Aliyev, the territorial integrity of Azerbaijan was fully ensured and the longing for lands was put to an end by defeating the hated enemy. We bow before the souls of our brave sons who martyred as a result of the 44-day Karabakh war, kiss the hands of the mothers of martyrs and wish healing to our wounded. Such a brave man, who wrote his name in history as a martyr, will always remember the sons of the Motherland, the memory of our brave sons who rose to the peak of martyrdom will not be erased from the memory”, emphasized Elshad Ahmadov.

The event was also attended by Doctor of Biological Sciences, Professor Shaig Ibrahimov, Head of the Center for Applied Zoology, Ph.D. in Biology Barat Ahmadov, a leading researcher of the Dry Vertebrate Laboratory, Ph.D. in Biology Tavakkul Isgandarov, Head of Public Relations Department, Doctor of Biology Shukur Guliyev, a researcher at the Vertebrate Laboratory Sevinj Rajabova, and others congratulated our Supreme Commander-in-Chief and our people on this joyous day. The employees spoke about the successes of our victorious army on the front, the progressive policy of President Ilham Aliyev, who signed a brilliant victory. They spoke about the destruction of Nagorno-Karabakh, possessing richness in flora and fauna, by the enemy for many years, the pollution of the environment, the looting of natural resources, the falsification of history by presenting our historical monuments to the world as an example of Armenian material history and culture.

As a team of the Institute of Zoology of ANAS, we are proud of the fact that our people, united as a fist under the Supreme Commander-in-Chief in this great victory, have a powerful leader who is not afraid to say a decisive word for the Motherland!