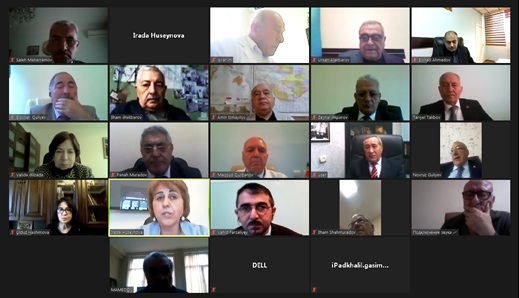 Opening the meeting organized in a virtual format on the Zoom platform, Vice-President of ANAS, academician Irada Huseynova congratulated the members of the Department on the great victory of the Karabakh war and restoration of the territorial integrity of the Republic of Azerbaijan, meanwhile, conveyed greetings and congratulations of President of ANAS, academician Ramiz Mehdiyev. The speaker noted that the day that the Azerbaijani people have been waiting for 27 years has come, and in just 44 days our occupied lands have been liberated from the clutches of the enemy. Under the leadership of the President of the Republic of Azerbaijan, Supreme Commander-in-Chief of our Armed Forces, Mr. Ilham Aliyev, the Azerbaijani Army has written new glorious pages in our modern history.

Academician Irada Huseynova said that this historic victory is the logical conclusion of the strong state-strong army strategy implemented by President Ilham Aliyev over the past 17 years. The main driving force of the great victory was the unshakable people - the leader, the people - the unity of the army, the unity of all Azerbaijani citizens, regardless of ethnic and religious affiliation. The serious moral and political support of the Republic of Turkey and its people should also be noted. Academician Irada Huseynova expressed her bowing to the memory of our martyrs who martyred for the salvation of our holy land in this struggle.
During the war, Azerbaijani scientists also contributed to the front and our fighting army with material and moral support, actions and regular visits to the front lines.

A joint statement signed by President of the Republic of Azerbaijan Ilham Aliyev, Prime Minister of Armenia Nikol Pashinyan and President of the Russian Federation Vladimir Putin on November 10 reaffirmed the complete defeat of Armenia. Academician Irada Huseynova noted that after this great victory a great return to the liberated territories will begin, and in a short time this place will become a prosperous land. On October 30, 2020, proper to the decision of the Presidium of ANAS on the tasks of ANAS on scientific research on the liberated territories of Azerbaijan DBMS scientists are working to define the priority areas of multidisciplinary research.
In addition to the work to be done by the Department on biodiversity, genetic resources, land and water resources, it will hold a series of international conferences on the damage caused to the flora and fauna of Azerbaijan and the world, landscape, historical, cultural and natural monuments, underground and surface resources. Among the proposals were the organization of round tables, the publication of relevant scientific articles in international journals, the creation of open-air museums with canned elements of the destroyed landscape, looted historical and cultural monuments, buildings, and scientific support for the selection of facilities.

Academician Urkhan Alakbarov, corresponding members of ANAS Novruz Guliyev, Magsud Gurbanov, Amin Ismayilov, Tarlan Mammadov, Zeynal Akparov, Ibrahim Azizov, Alovsat Guliyev, Doctors of Biological sciences Ulduz Hashimova, Vahid Farzaliyev and others spoke at the event and congratulated our people, also expressed unanimous support for the purposeful policy pursued by the President for the prosperity of Azerbaijan and the liberation of our lands, strengthening the achievements.
Finally, DBMS members addressed an appeal to the President of the Republic of Azerbaijan, Supreme Commander-in-Chief Ilham Aliyev.

The text of the appeal:

On behalf of the General Meeting of the Department of Biological and Medical Sciences of ANAS, I express my deep gratitude to you on the occasion of the historic victory in the Second Karabakh War. Under your command, with this victory, our army brought joy to the people of Azerbaijan, which it has longed for many years, and touched the hearts of the mothers of martyrs. You have raised the national pride, self-awareness and self-confidence of our people to an unprecedented level. By solving the problem that the whole world could not solve for 30 years in a month and a half, you have rewritten the history of victory of modern Azerbaijan in golden letters.
As a great head of state and a triumphant commander, you have created a new military-political atmosphere in the region with your great victories in the fields of politics, information and diplomacy, and have gained great prestige for our people.
Today, the members of our Department and the staff of the institutes are tuned to the period of great return and peaceful construction. We will do our best to meet the challenges of revitalization and development plans widely discussed in society, to explore, protect and effectively use the nature, landscape, flora and fauna, underground and surface resources of Karabakh, to restore and improve our degraded lands.
May the Almighty God protect you and your family, our people and the Karabakh you have returned!

With deep respect and esteem,