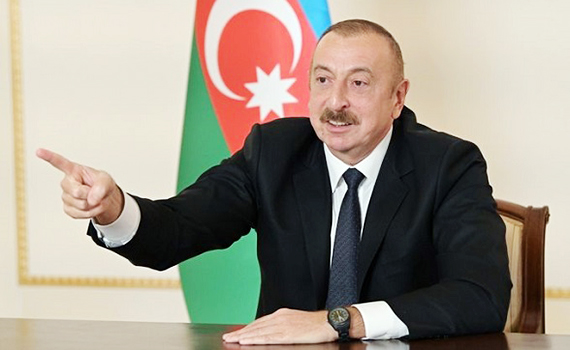 Our flag will be raised in every part of Karabakh!

... Our people are witnessing golden victorious historical days!
Starting from September 27, 2020, under the order and direct leadership of the President of the Republic of Azerbaijan, Supreme Commander-in-Chief Ilham Aliyev, the glorious Azerbaijani army is conducting counter-offensive operations in our occupied territories in response to the attacks of Armenian invaders. As a result of successful combat operations, the fortification line built by the enemy was broken, numerous Armenian forces and military equipment were destroyed, the historical Azerbaijani lands under the enemy's footsteps - Fuzuli, Jabrayil, Zangilan, Gubadli, Khojavend, Hadrut, Minjivan, Sugovushan, a very significant part of Agband, was liberated from occupation. The tricolor Azerbaijani flag is proudly hoisted on the Khudafarin Bridge, a symbol of the historical unity and heroism of our people, in our native lands - Fuzuli, Jabrayil, Zangilan, Gubadli, Hadrut, Sugovushan, which have been liberated as a result of the great Azerbaijani army's special operations. Currently, the military operations to liberate other occupied territories from the enemy's footsteps are continuing with determination, and will soon be completed with a great victory!
Long live our soldiers!
Long live our victorious army!
Long live Supreme Commander-in-Chief!
THANK YOU, MISTER COMMANDER-IN-CHIEF!
Long live Azerbaijan! Long live Karabakh! KARABAKH IS AZERBAIJAN!
On behalf of the population and intellectuals of Fuzuli region:
Corresponding member of ANAS, Professor Akif MUSAYEV
Ph.D. in Economics, Associate Professor Alovsat ALIYEV