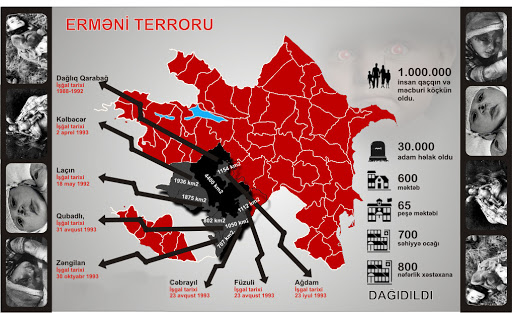 The tragedy of the occupation

At the end of the 20th century, Azerbaijan experienced the world's greatest occupation tragedy.
As a result of Armenia's military aggression against Azerbaijan, 20,000 Azerbaijanis were killed, 4,866 were missing, 100,000 were injured and 50,000 were injured.
Military aggression has affected 17,000 square kilometers of our republic. occupation of the most productive lands, 900 settlements, 130939 houses, 2389 industrial and agricultural facilities, 1025 education, 798 health centers, 1510 cultural institutions, 5198 km. of highways, 348 bridges, 7568 km. water and 76940 km. caused the destruction of power lines. Armenian aggressors destroyed the cultural objects of Azerbaijan's cultural heritage in the occupied territories with special cruelty. They looted and burned 12 museums and 6 art galleries, as well as 9 historical palaces in the occupied territories. The wealth and exhibits of 40,000 museums of unique historical significance were looted, 44 temples and 18 mosques were insulted. 4,600,000 (four million six hundred thousand) books and unparalleled manuscripts were destroyed in 927 libraries destroyed and burned.
It is impossible to accurately calculate the damage caused by the Armenian aggressors to the national cultural centers of Azerbaijan in the Nagorno-Karabakh region and surrounding areas, because the looted and destroyed treasures are unique cultural samples not only of Azerbaijan but of the whole world civilization. Along with the moral and psychological damage inflicted on the population, according to initial and unconfirmed information, the Azerbaijani economy has suffered more than $ 60 billion.