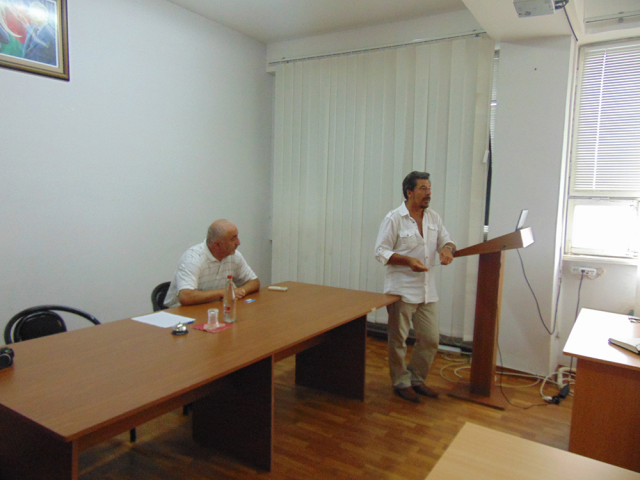 The meeting with the Head of the Department of “Zoology and evolutionary ecology of animals” of the Tyumen University, academician of the Russian Academy of Natural Sciences, Sc.D. in Biology, prof. Gashev Sergey Nikolayevich was held at the Institute of Zoology on July 28, 2016. The event was opened by the Director of the Institute of Zoology Institute Elman Yusifov. He spoke about the projects implemented within the framework of the international cooperation in recent years. One of the main problems- building relations with the world’s leading scientific and educational institutions for the integration of the Azerbaijani scientists to scientific environment was stressed by him. Purposeful work towards strengthening international cooperation is carried out at the Institute. Then, Sc.D. (Biology), prof. Gashev Sergey Nikolayevich’s report was heard. It should be noted that professor’s department is engaged in the research of vertebrates around the Caspian Sea, especially hedgehogs and their populations for a long time. Then, he said: “The meeting held with the Director of the Institute, Sc.D. in Biology, professor Gashev Sergey Nikolayevich will play an important role in considerable progress in achieving the goals.” He took into consideration the importance of holding such traditional scientific seminars with experienced specialists. He noted multifaceted cooperation perspectives of the Institute of Zoology with this crew researching migration flow of the same or different species of the hedgehogs around the Caspian Sea. There was an exchange of views on mentioned issues, questions and offers were heard. After the seminar, discussions between the governance of the Institute and Mr. Sergey Nikolayevich were continued at the round table meeting. He emphasized the possibility of carrying out works, as a result of the mutual cooperation principles between the institutes under the Tyumen University and ANAS Institute of Zoology, joint conferences, more interesting expeditions.

Additionally, one of the most important issues- taking advantage of the personnel in this field within the framework of the cooperation with the Tyumen University due to the rare local experts in determining the level of rarity of the animal kingdom was taken into consideration.