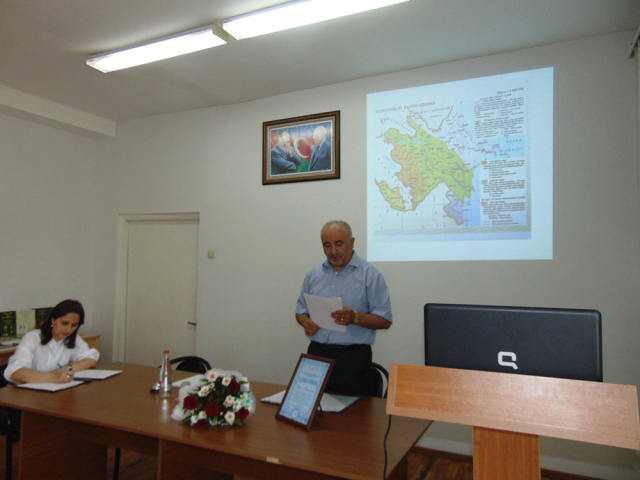 The next meeting of the Scientific Council has been held

The next meeting of the Scientific Council (ANAS) has been held. Director of the Institute, Elman Yusifov has introduced issues on the agenda to members of the Council. He congratulated senior scientific worker of the Laboratory of “Arachnology”, Ph.D. in Biology Zohra Musayeva on long-term employment, as well as on her 60th anniversary on behalf of the staff and presented her with an “Honorary diploma” from the Institute of Zoology (ANAS), rewarded by a monthly wage. Chairman of Trade Union of the Institute of Zoology Barat Ahmadov congratulated her on this momentous day and presented her an award on behalf of the organization.

Chief of the Department of “Protistology” Ilham Alakbarov informed about the map of the “Physico-geographical regionalization”. This issue was put to the vote and adopted by the members of the Scientific Council.

Then, scientific worker of the Laboratory for "Parasites of aquatic animals" Ph.D. in Biology Fuad Rzayev made a speech on "Role of electron microscopic researches in the development of Biology". The Institute's laboratory heads were advised to make efficient use of these opportunities. Commission for the Remuneration of articles published in Scientific Journal Impact Factor was created at the meeting.