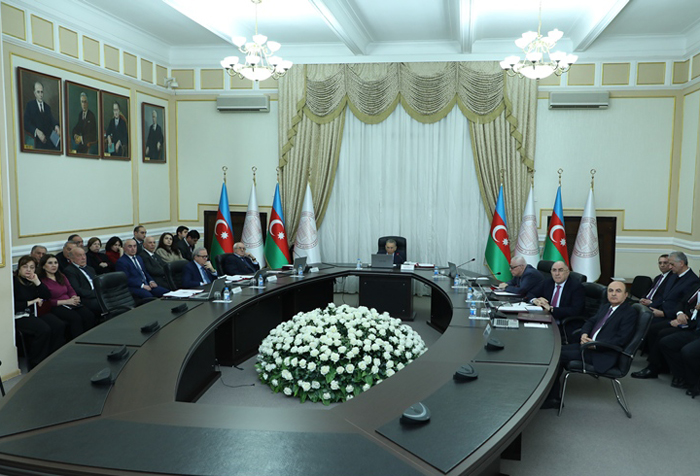 On January 24, a regular meeting of the Presidium of ANAS was held.

Opening the event, academician Ramiz Mehdiyev noted that today reports will be listened on the results of scientific and scientific-organizational activities of the Division of Biological and Medical Sciences of ANAS and Lankaran Regional Scientific Center of ANAS in 2019.

Then the report of the Division of Biological and Medical Sciences was presented by the vice - president of ANAS, chairman of the Division academician Irada Huseynova. The academician reported that in the reporting year, activities of the scientific institutions of the division were based on the decrees and orders of the President of the Republic of Azerbaijan, state programs, orders of the head of ANAS, resolutions of the General Meeting and the Presidium of ANAS.

Academician Irada Huseynova spoke about studies that were carried out in areas such as the study, restoration, conservation, rational use of biodiversity, soil and water resources, creation of databases based on these studies, study of molecular genetic and physico-chemical foundations of biological processes, genomic and proteomic research, development of the fundamental foundations of new biotechnologies, study of the physiological and molecular genetic foundations of pathologies, use of high technologies and stem cells to the development of new diagnostic and therapeutic methods, medicaments and in reproductive medicine, etc. She noted that last year studies covering 18 problems, 90 topics and 267 works, at 483 stages were conducted, 29 topics and 111 works were completed. The academician added that according to the results of research, 8 works found their application. She also reported that in the reporting year, five multidisciplinary research programs were successfully implemented, which were funded by the Presidium of ANAS and aimed at solving fundamental scientific problems.

Having said that in 2019, employees of scientific institutions took part in various national and foreign international grant projects, speaker emphasized that the scientists conducted research on the basis of 50 projects funded by various foundations, 25 of them worked together with foreign scientists. In the reporting year, the institutes of the division received 11 patents, 2 of which were obtained abroad.

Having said that last year 25 people entered the master studies of the institutes of the division, academician emphasized that 20 people graduated from Master’s, and now 40 people continue their studies.

Speaking about the activities carried out in the field of the integration of science and education, Academician Irada Huseynova said that in the reporting year, relations with the corresponding departments of several universities of the republic were expanded, and most universities have basic departments and branches inside.

After discussions, Presidium approved the report on the scientific-organizational activities of the division in 2019, it was decided to include important results in the report of the Presidium of ANAS. The studies on the study, restoration, conservation, rational use of biodiversity, soil and water resources, based on modern approaches, creation of electronic databases and maps, research in the field of computer biology, use of artificial intelligence in biology and medicine, use of high technologies and stem cells in the development of new methods of diagnosis and treatment, drugs and in reproductive medicine. The division was given instructions aimed at solving the urgent problems of the agricultural sector to ensure food security in Azerbaijan, expanding for this purpose activities in the development of the fundamental foundations of molecular biological, genetic approaches and bioengineering, environmental protection, application of modern approaches, mathematical and molecular genetic methods in a complex multidisciplinary study, restoration and rational use of major ecosystems and biological variety of the republic, rare and endangered species, etc.

The next item on the agenda was the scientific and organizational activities of the Lankaran Regional Scientific Center of ANAS in 2019. Having delivered a report, director of the center, Doctor of Agricultural Sciences Farman Guliyev said that last year in LRSC five works were carried out in six stages on five topics, covering two problems, two stages on two topics were completed in six stages.

Farman Guliyev spoke about measures to collect, preserve, restore and comprehensively study the varieties and forms of tea, citrus and subtropical plants existing in the Lankaran-Astara zone, the creation of new varieties, as well as the study of the floristic composition, variety and characteristics of the Lankaran-Astara zone. He noted that as a result of the research, morphological, biological features and quality indicators of more than 50 tea clones were comprehensively evaluated, four varieties that exceeded control in a number of their characteristics were zoned and patented. In addition, the created varieties-forms of lemon and mandarin were submitted to the State Service for Registration of Plant Varieties and Seed Control under the Ministry of Agriculture of the Republic of Azerbaijan and are currently successfully tested.

Speaking about the works aimed at discovering archaeological and numismatic monuments in the southeastern region of Azerbaijan, compiling maps of their location, creating a numismatic fund and museum, cataloging numismatic materials and including them in scientific circulation, Farman Guliyev emphasized that in the Lankaran and Lerik districts archaeological explorations were carried out and new monuments were discovered.

Touching upon the issue of publishing activities of the LRSC, director said that in the reporting year 10 scientific works of the center’s employees were published, including one book, eight articles, one of which was published abroad, and one thesis, works of scientists were cited 20 times.

After listening to the report, discussions were held, questions were responded. After discussions, a report on the scientific and scientific-organizational activities of the Lankaran Regional Scientific Center of ANAS in 2019 was approved, center was given relevant instructions in connection with its further activities.