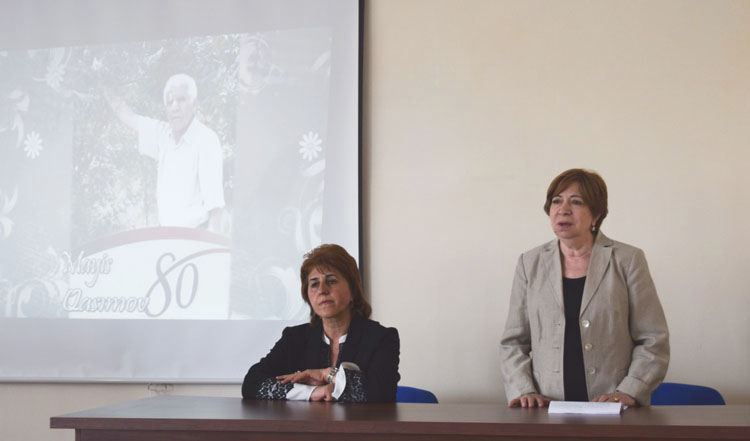 ANAS Institute of Botany held the 80th anniversary of a prominent botanist, scientist-inventor, winner of the Lenin Prize, Doctor of Biology Mais Gasimov.

Opening the event, Director of the Institute, academician Valida Alizade told about the life and activities of M.Gasimov, his achievements in the development of botany. She noted that, the scientist spent many years researching and analyzing herbarium materials, and obtained successful results on the use of dyes in the food and carpet weaving industry.

Then, ANAS Vice-President, academician Irada Huseynova noted that, the results of scientific research conducted by M.Gasimov made a great contribution to the development of science. She noted that, during his work the scientist actively participated in the public life of the institute, in addition to his scientific activities. He was a member of the Academic Council of the Institute, an applicant for candidate and doctoral theses, a reviewer and scientific editor of many works.

Deputy Director of the Institute for Scientific Issues, Doctor of Biology Eldar Novruzov delivered a report on the scientific and pedagogical activity of M.Gasimov. He noted that, in 1973 the scientist defended his thesis. For the theoretical and practical significance of the obtained scientific results, in 1974 the scientist was awarded the "Leninist Komsomol" award. In 1974 he was awarded the Certificate of Honor of the “Committee for Inventions and Rationalization” for the use of natural dyes in the carpet industry.

It was noted that, during his work at the institute 230 scientific works, 8 monographs, 2 books, 1 methodical manual, 20 patents were published, over 70 production proposals were developed and applied. More than 600 popular science papers have been published. In 2017, the last book was published.

In conclusion, the wife of the scientist, researcher of the institute Tunzal Gasimova expressed gratitude to the organizers and participants of the event.