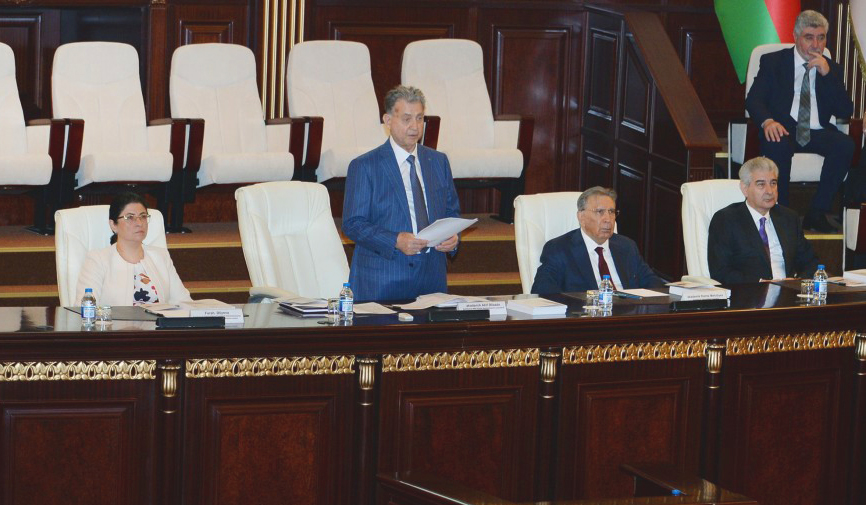 The Annual General Meeting of the Azerbaijan National Academy of Sciences was held on May 1.

Head of the Presidential Administration of the Republic of Azerbaijan, academician Ramiz Mehdiyev, Head of the Department of Humanitarian Policy of the Presidential Administration Farah Aliyeva, Deputy Prime Minister of the Republic of Azerbaijan Ali Ahmedov, heads of various state institutions and universities, active and correspondent members of ANAS, directors of institutions and organizations, Mass media representatives attended the meeting.

First, participants of the event got acquainted with the exhibition reflecting scientific achievements of ANAS. Various editions and new products were demonstrated at the exhibition at the academy's institutions and organizations, regional divisions and scientific centers as well as for the Presidium in Azerbaijani, Russian and English languages.

Then the General Assembly started. The prominent scholars were commemorated with a one-minute silence.

In accordance with the important strategic objectives of the state policy, ANAS has taken important measures in the direction of the development of science and education in our country in 2018. Last year, ANAS has developed scientific and technical potential, multidisciplinary researches, expansion of international scientific relations, strengthening of relations between science, education and economics, preparation of highly qualified personnel, coordination of scientific research activity, scientific potential of the country, economic problems, and other important work has been done, speaking about scientific and scientific-organizational activities of ANAS for 2018, ANAS president academician Akif Alizadeh, said.

Recalling the order of the President of the Republic of Azerbaijan Ilham Aliyev to establish the Day of Science in the country, the academician stressed that this is another indication of the attention and care of the President of our country. Akif Alizadeh noted that in 2018, he closely participated in the implementation of about 20 state programs and other state tasks of the scientific institutions of ANAS and carried out important scientific research works and projects on the implementation of the science policy of the state.

Speaking about the unity of science and education, the head of ANAS noted that significant measures were taken in the reporting year in order to improve the staff training system in accordance with modern standards and apply the results of scientific research in the educational process. He emphasized that for the 2018/2019 academic year totally 67 admitted to master’s degree of ANAS.

He also informed about the work done in the field of academic innovation. In the reporting year, ANAS's High Technologies Park (HTP) has made significant progress.

After the report academician-secretary of ANAS, academician Rasim Alguliyevanswered questions about scientific and scientific-organizational activity of Presidium of ANAS in 2018.

Head of Laboratory of the Institute of Control Systems, academician Asaf Hajiyev also spoke at the meeting.

The draft resolution of the General Assembly was discussed at the event. The activity of the Presidium of ANAS in 2018 was considered satisfactory and the report was approved. According to the decision, the Presidium of ANAS was instructed to continue the implementation of the tasks set by the President of the Republic of Azerbaijan Ilham Aliyev in the development of science, and to further strengthen the participation of ANAS in the development and implementation of scientific and technical policy of the state. In addition, tasks were given on the cooperation with relevant agencies in the implementation of "Strategic road maps for key sectors of the national economy and economy" and other state programs, as well as the strengthening of scientific research work on the 50th anniversary of National Leader Heydar Aliyev's coming to power in our country, order of the head of state "On the celebration of the 650th anniversary of the great Azerbaijani poet Imadeddin Nasimi" and the execution of the relevant decision of the Cabinet of Ministers of the Republic of Azerbaijan.

Academician Dilgam Tagiyev, vice-president of ANAS, made a report on the topic "The periodic table of chemical elements is one of the fundamental laws of nature." He also said that the Periodic Table of Chemical Elements plays an important role in the development of physics, chemistry, biology, geochemistry, crystallography, astrophysics and other sciences as well as systematizing chemical elements. He added that the periodic table in the twentieth century, despite many changes, was eventually improved.

The speaker spoke about the important role of the Periodic Table in the search for a synthesis of inorganic functional materials, semiconductors and topological insulators in Azerbaijan and informed about the scientific results achieved in recent years at the Institute of Catalysis and Inorganic Chemistry of ANAS.

Chairman of the National Center for Nuclear Research, academician Adil Garibov, Dean of the Faculty of Chemistry of Baku State University, Professor Abdulsaid Azizov and Head of the Department of Chemistry and Inorganic Substances of the Azerbaijan State Oil and Industry University, Doctor of Chemistry Yunis Gahramanov made speeches at the scientific session.

Academician Akif Alizadeh then made a closing speech. That it is important to continue the activities within the framework of the “Nizami” project of  Erasmus + program of the European Union in order to ensure integration into the European education system, and to further strengthen the activities aimed at sending young scientists to world-renowned scientific centers and higher education institutions for internships and education, head of ANAS stated.