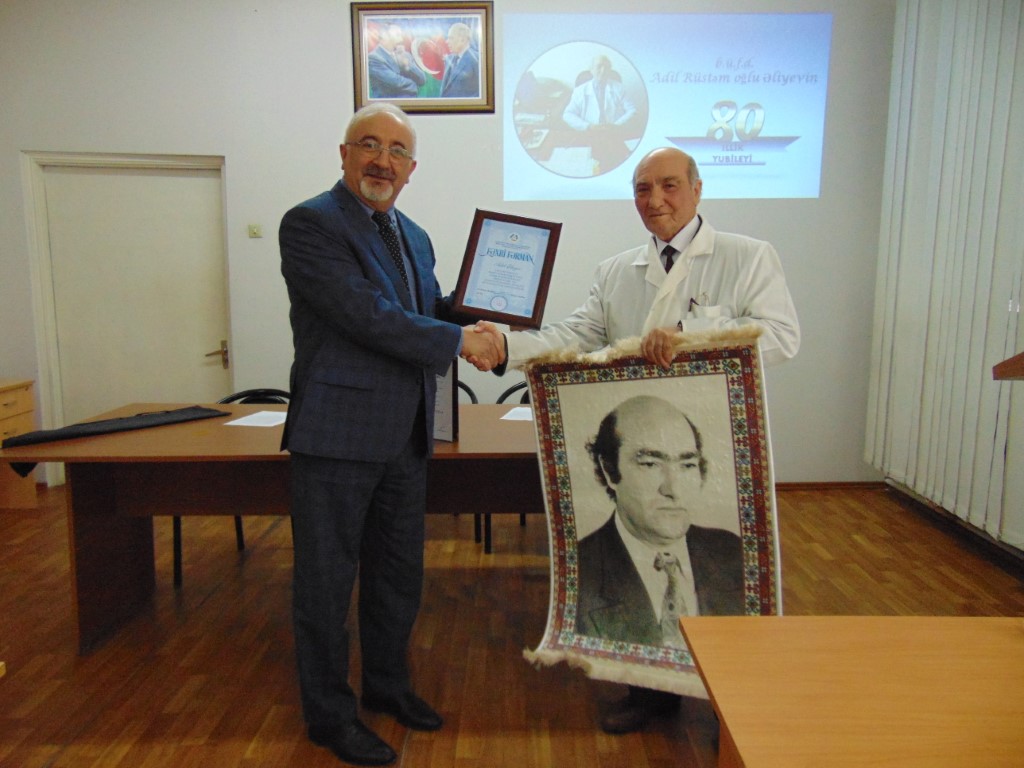 80th jubilee of the zoologist Adil Aliyev was celebrated

An event dedicated to the 80th anniversary of Adil Aliyev, the head of the Hydrobiology Laboratory of the Institute of Zoology of ANAS, PhD in Biology was held. Opening the event, the Director of the Institute of Zoology, PhD in Physics Elman Yusifov has made a speech about hydrogenologist's meaningful way of life, rich scientific creativity. So that Aliyev Adil Rustam oglu was born in 1939 in the village of Sadarak, Sharur region of Nakhchivan Autonomous Republic of Azerbaijan. In 1968- 1971 he was a post graduate student at the Institute of Zoology of ANAS, and he was awarded a PhD in Biology in 1972. Since 1971 he worked as a senior laboratory assistant, small scientific worker (1971-1974), senior scientific worker (1974-1995), leading scientific worker (1995-2005) in the Hydrobiology Laboratory and he was awarded an academic title of associate professor in 1994. He has been working as a Head of Hydrobiology Laboratory since 2005. He is an author of more than 200 scientific articles on hydrophosphates of various water basins in Azerbaijan, 4 collections and 2 translations ("Invertebrates zoology" (1981) and "Ecology of the Caspian Sea Plankton" (2004)). He is also a co-author of the textbooks for Hydrobiology (2010), Dictionary of biological terms (2004), Biology Dictionary (2011) and Biological Tips (2011) for higher education. A.R.Aliyev is a well-formed hydrogenologist on water basin fauna. He has served as the executive officer and scientific director of a number of (more than 10) scientific researches and economic contracts on this area. He is also a member of the editorial staff of the large volume of fundamental works - "The Study and Protection of the Animal World at the end of the 20th century" (2001), the 1st Congress of the Azerbaijan Zoological Society (2003), the Society and the Institute's works. A.R.Aliyev has repeatedly made scientific reports at international scientific conferences, symposiums and congresses. The main research object of A.R. Aliyev is the fauna of Oligohymenophorea of freshwater basins. He provided the first description of up to 30 infusions of science that is new to science in this field. He is actively involved in the scientific and social life of the Institute. Under his leadership, 5 persons defended a PhD thesis on different fields of hydrobiology, and two were on the eve of defense. He is currently a member of the Scientific Council and Defense Council's workshop. At the end of the event, he was awarded the honorary decree of the Institute of Zoology, the Honorary Decree of the Free Trade Union of ANAS and a portrait carpet were presented to him, on the occasion of his 80th birthday, he was wished successes and well-being in his work.