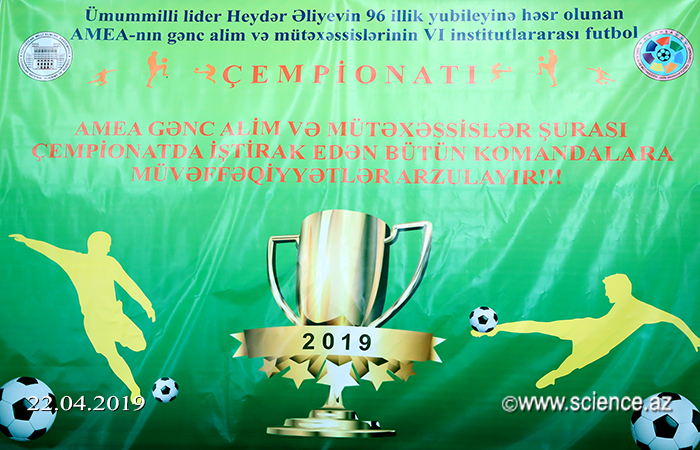 The opening ceremony of the VI Interinstitutes Football Championship of Young Scientists and Specialists dedicated to the 96th anniversary of national leader Heydar Aliyev was held with the support of the Council of Young Scientists and Specialists of ANAS, with the support of the Office of Administration and Free Trade Unions  of ANAS.

Head of FTU, Doctor of Law, Professor Habil Gurbanov, Head of the Press and İnformation Office of ANAS Presidium Zulfugar Farzaliyev, head of the campus Bayram Babayev, chairman of the Trade Union of the Institute of Geology and Geophysics Kamran Aliyev and young scientists.

Chairman of the council, PhD in physics, associate professor Famin Salmanov said that the championship is already traditional and has been held for the fifth year. He noted that this year's tournament coincides with the 96th anniversary of national leader Heydar Aliyev. Salmanov said that the championship will be held with the participation of 16 teams from April 22 to May 15, and that the games will be run by the AFFA Professional Judge Brigade.

Afterwards, Habil Gurbanov said that the championship was commendable and said it would contribute to the development of sports in our country.

Then, the championship's group games started with a meeting of the teams of the institutes of Geology and Geophysics and Control Systems.